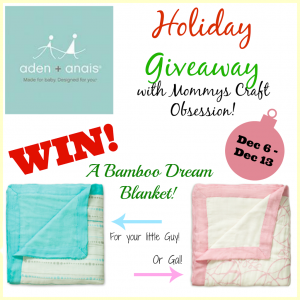 Hosted by Mommys Craft Obsession
Sponsored by Aden & Anais
From Mommys Craft Obsession
When it comes to swaddling your little one and providing them with the softest and coziest baby blankets, what brand comes to mind? Most moms would agree that it would be Aden & Anais. When I first learned about Aden & Anais I was anxious to get my hands on one of their swaddles for Little Mister, even though by then he was well out of the stage of swaddling! Once I bought my first Aden & Anais (or more commonly known around the mom community as “A&A”), I got addicted. Before I knew it I had about 5 swaddle blankets for Little Mister including a couple of their Bamboo Swaddles. I had been told that their Bamboo Swaddles were heavenly, but I had just no idea how much I would love them until I had one in my hands. The description that comes to mind is “silky butter”. I know, that sounds ridiculous, but there really are no words to describe how luxurious it felt!
In 2003 the founder of Aden & Anais, Raegan, received news that she was expecting her first child. She sought out to find some muslin swaddle blankets for her unborn daughter, a parent ‘staple’ in Australia where she is from, and was disappointed to not find a single swaddle blanket that fit her needs. They were all either to thick or to small, and she was stunned that New York moms had yet to experience a swaddle blanket similar to what they had back home in Australia. In 2006 Aden & Anais was born, bringing high quality muslin swaddle blankets to the parents of the United States. Aden & Anais blankets are now sold in over 60 stores around the world. 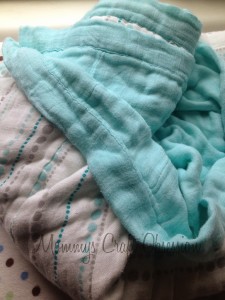 Now on to the giveaway! One lucky winner is going to receive an Aden & Anais Bamboo Dream Blanket just in time for the holidays! Enter the Giveaway Tools form below to win! Good Luck!!!

Entry-Form
The Giveaway will close late on the evening of December 13th. The winner will be chosen at random through  Giveaway Tools.  The winner will be announced both on Giveaway Tools form as well as notified by email and announced on MCO’s Facebook. The winner will have their prize sent to them by Aden & Anais, Mommys Craft Obsession is not responsible for prize shipment. Must be 18 years and older. Facebook, Twitter, Pinterest, and Google are in no way affiliated with this giveaway. No Purchase Necessary. US Only. This blog did not receive compensation for this giveaway. This disclosure is done in accordance with the Federal Trade Commission 10 CFR, Part 255 Guides Concerning the use of Endorsements and Testimonials in Advertising.