As I was looking back on some of the recipes I have blogged about, I was shocked to realize that I had only posted one dessert recipe.  I’ll go ahead and throw it out there, that I’m not much of a baker.  While I would love to be, it just doesn’t always work out exactly as planned.  But I will be trying to whip up some great creations for you all in the future.

If you have been following my posts for awhile now, you may know that I have somewhat of a cheesecake obsession.  Two of my most favorite recipes I have shared with my fans are my NY Cheesecake Pancakes and most recently my Pumpkin Cheesecake Pancakes.  But apple pie cheesecake? It’s the best of both worlds! 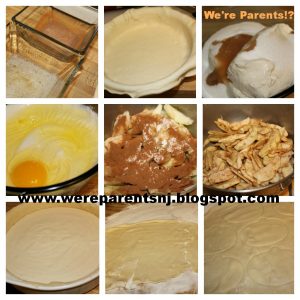 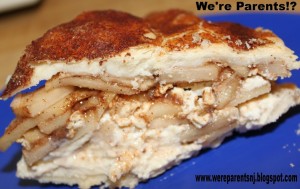 Ingredients:
1 box refrigerated pie crusts, brought to room temp according to the box

**If using a 9in pie plate increase apples to 8 cups

Directions:
Heat oven to 400 degrees.  Cover a baking sheet with foil and place in oven.  Place one of the pie crusts in the bottom of an 8 inch pie crust covering the sides and bottom of the dish.  Cut off an excess crust hanging over the side.

In a large bowl, add cream cheese, 1/2 cup sugar, and vanilla and beat on high with mixer until smooth.  Add   1 egg and 2 egg whites and beat in to cream cheese mixture.  Make sure to scrape sides to get everything combined. Pour into pie dish on top of crust.

Unroll second pie crust onto lightly floured surface and using a cookie cutter cut out shapes and arrange on top of apple to cover most of the filling.  **The original recipe calls for an apple cookie cutter; however, I don’t have one of those, so I used pumpkins to fit in with the season 🙂

Brush egg white mixture over shapes, then top by sprinkling on cinnamon and sugar mixture.

Cover pie with foil and place in oven on top of foil-lined cookie sheet. Bake for 25 minutes.  Remove foil and bake for an additional 25-30 minutes until crust is golden brown.  Let cool down on a wire rack, then put in fridge for 6 hours minimum.  Should be served cold.  Store leftovers in fridge.

****This was my first time making this or **gasp** any pie for the matter.  The taste was amazing and I will be making it again; however, I would change one thing in particular.  I would add half the cream cheese filling, half apples, remaining cream cheese, then top with apples. Simply because I would have preferred everything mixed together in layers.