You are here: Home / Baby Words / Breastfeeding…How Long Should You Do It?

There has been a lot of debate lately about breastfeeding. 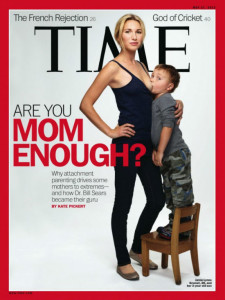 Then, two military moms were featured in the news for breastfeeding while wearing their uniforms. 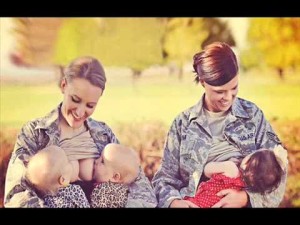 I was about 3 months pregnant when all of this controversy started and I have to admit it confused me even more. The military mom debate upset me because I don’t believe there is anything wrong with this; however, with the TIME magazine article, I have to admit, the thought of still breastfeeding while preparing my child for school in the fall, scares me. The thing about the TIME cover that angered me was the title “Are You Mom Enough?”  To me, it suggests that if you don’t breastfeed that long, or even at all, you aren’t as “MOM” as women that do. And in a country where breastfeeding is already frowned upon in public, this should not be the message being portrayed.
Enough about my opinions on the articles….I knew way before I became pregnant that I was going to breastfeed. My mom breastfeed me and my sister has breastfeed both of my nieces and plans on it once her new baby arrives. I know the health benefits of breastfeeding over formula feeding, as well as the cost benefits (obviously my breasts are free vs paying for formula).
After speaking and hearing some local moms in a variety of FB mom groups I’m in, I know this is one more thing I need to spend a lot of research on.  Obviously, anything can happen and there’s always the possibility that maybe I won’t be able to breastfeed at all….(I pray constantly this doesn’t happen)….but my first goal is going to be 6 months exclusively breastfeeding (EBF). This means nothing for my baby except breastmilk.
The American Academy of Pediatrics (AAP) and the World Health Organization (WHO) have both reaffirmed their recommendations to EBF until 6 months. A baby simply doesn’t need anything beside the nutrients a mother can give during this time. The WHO also has a great article on when to start introducing other foods after 6 months as well.
What are your thoughts/opinions on breastfeeding? What age is too old and why do you feel that way?
Updated 2/13/15 — Interestingly enough as confused as I was at the time of posting this, I am currently nursing my 26 month old while pregnancy with Baby #2.  How time changes things!

How to Respond When Someone Asks “Are You Still Breastfeeding?”