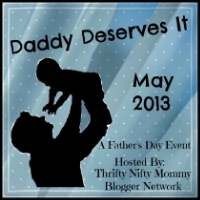 Today, Megan from Housewife on a Mission has a review and giveaway of the Innovia Automatic Paper Towel Dispenser! Daddy Deserves this awesome product, find out why by reading below!

How many times do you find yourself cooking up a great meal in your kitchen and you suddenly need a paper towel, but your hands are slopped up with raw meat? What about when you’re holding your baby and you just don’t have two hands to rip off a paper towel from the paper towel roll?

My hubby is an awesome chef (not professionally, but STILL), which I think I have mentioned a few times on my blog. When he cooks, it’s an absolute treat! Sometimes, I wish he would be willing to go on one of those cooking shows to show off his incredible talent! While, he is an amazing cook, he is a messy one at that 🙂 He is constantly grabbing paper towels when cooking, but his hands are messy and even have raw meat residue on them. Before life with the Innovia Automatic Paper Towel Dispenser, it was sometimes complicated to get a paper towel and we would even have to sanitize the paper towel holder from our dirty hands touching it. Now that we have the Innovia Automatic Paper Towel Dispenser, we can get a paper towel, hands free, quickly and easily with no worries of germs spreading!

There are 4 different colors the Automatic Paper Towel Dispenser comes in! They are stainless steel, black, red and white. I chose the black paper towel dispenser to review. 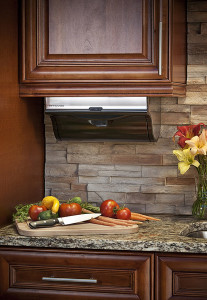 Unlike any other paper towel dispenser on the market, the INNOVIA Automatic Paper Towel Dispenser comes equipped with a Smart Dispense™ sensor that enables it to learn the perforated length of each towel, thereby allowing it to accept nearly all household paper towels regardless of sheet size and thickness. If extra towels are dispensed, simply tear off what you need and the excess is retracted automatically. 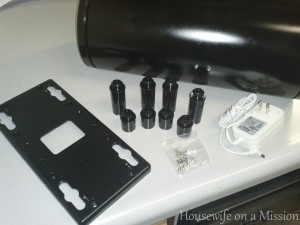 By the way, the instructions are very easy to understand which I like (doesn’t everyone?). It was very easy do install; you can do it by hand with a screwdriver, or with a power drill. My husband did it by hand and had it up in no time, it really was so simple! After we hung it up, we plugged it in into the wall outlet and ta-DA!! Our new automatic paper towel dispenser was now ready to use! (Can be powered by four D cell batteries or by the included ac adapter).

I think it is so neat that all I have to do is wave in front of the sensor to have a paper towel dispensed! What’s even more awesome, is that it retracts if I don’t take it, or it brings out 2 squares (we have the shorter 1/2 squares) and I only want and take 1. 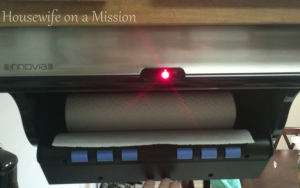 It’s incredible easy to refill the paper towel roll, my 4 year old can do it! The red light means that the sensor will not work and basically like it’s inactive, until you shut the dispenser.

I love the look of the dispenser, it’s very modern and sleek looking. I was able to make a little more room for counter space by not having a paper towel holder on the counter, but I just can’t get over how great the Innovia automatic paper towel dispenser looks and how convenient it is! 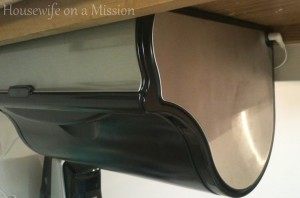 Here is a side view
Here is a video to see the Innovia Automatic Paper Dispenser in action!

Overall, I really love this automatic paper towel dispenser and have had no problems at all! I recommend it to everyone, and even my family members who have seen it in our home love it and want one!

Buy It: You can go Amazon.com and buy the Innovia Automatic Paper Towel Dispenser for $99 (Currently $87.82 with FREE shipping!) 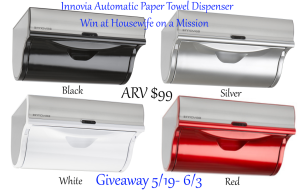 Win It: One lucky reader is going to win a Innovia Automatic Paper Towel Dispenser (ARV $99) by entering through the Rafflecopter below. Open to US residents ages 18+  Giveaway ends on 6/3 at Midnight.

Do you love this blog? Please click on the Top Mommy Blogs Banner to cast a vote for me! It’s a simple as a click 🙂 You can vote daily! Thanks so much!