You are here: Home / Breastfeeding / I Don’t Want To Tandem Breastfeed 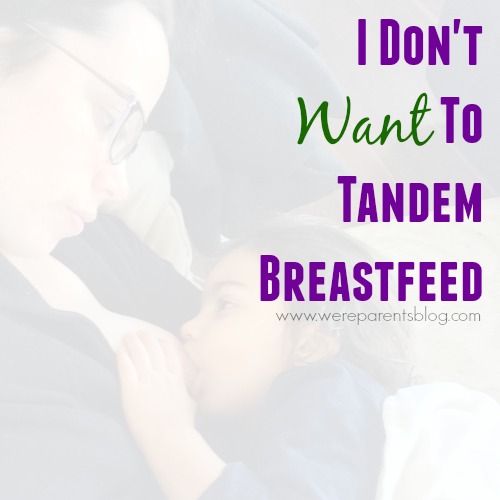 I don’t want to tandem breastfeed my two children.

There I said it.  A sense of relief should have happened, right? It didn’t. Maybe because at this point I know it’s not my decision to make.

I knew I would breastfeed Skibbles, but I didn’t expect it to last long.  I fell into the myth that my mother and sister couldn’t do it long with their firsts, so I wouldn’t be able to either, but everyday went by and we kept breastfeeding.

I thought breastfeeding a toddler was odd and didn’t want to do that either. But here we are at 27+ months and still breastfeeding and I know now that it’s not odd, it’s normal.  Very, very normal.

However, here I am pregnant with my second and still breastfeeding.  When I got pregnant, I was determined that we would NOT tandem nurse. It’s not that I don’t think it’s beneficial or that I think it’s weird.  Skibbles is very demanding now with asking to breastfeed and we struggled in the beginning weeks of our relationship.  My reason for not wanting to tandem is that I’m worried about that struggle with a newborn again and now an upset toddler who has to wait.

So we cut down nursing times and battled through the aversion.  She would stop nursing when my milk dried up, right? Wrong. Around 13/14 weeks, I stopped producing. She wouldn’t ask as often, but nap and bedtime were not happening without nursing. It completely secured my sense that breastfeeding is more than nutrition, it’s a complete comfort for her.  And that’s okay.

She would stop nursing when my colostrum came in, right? It would taste different and she would say “yuck” and stop, right? Wrong.  She was so excited when around 25/26 weeks it started coming back.

Now, we’re well into our third trimester and she’s still nursing.  I still don’t want to tandem, but I’m coming to accept that it will be our reality very soon.  My relief comes in so many moms telling me that it actually helped their toddler not only bond with the new sibling, but helped their toddler overcome jealously since they were able to do it together.

So, no, I don’t want to tandem breastfeed my two children.  But, I will.  And I will be fully engaged in continuing to comfort and nourish both of my children until the time comes where she decides she is done.  Hopefully, that’s before college starts.

Did you tandem breastfeed?  Leave a comment letting me know your story!

What do you REALLY need for breastfeeding?