You are here: Home / Home / It Happened #RoadtoTubalat30

I checked into the hospital around 11am (side note: not eating after midnight usually sucks, so I highly recommend scheduling the day after a holiday. I was still pretty full from Thanksgiving AND I had leftovers for after surgery!). After changing into the hospital gown, getting my vitals checked, and taking a pregnancy test (just in case), it was a waiting period. Of course that left me with nothing but time to think about the decision I was making even more. I was told my doctor would be in after she finished the current surgery she was doing. Once she came in, she asked one more time, “Are you sure this is what you want to do?” I commend them for making sure, but I was definitely over being asked by this point. 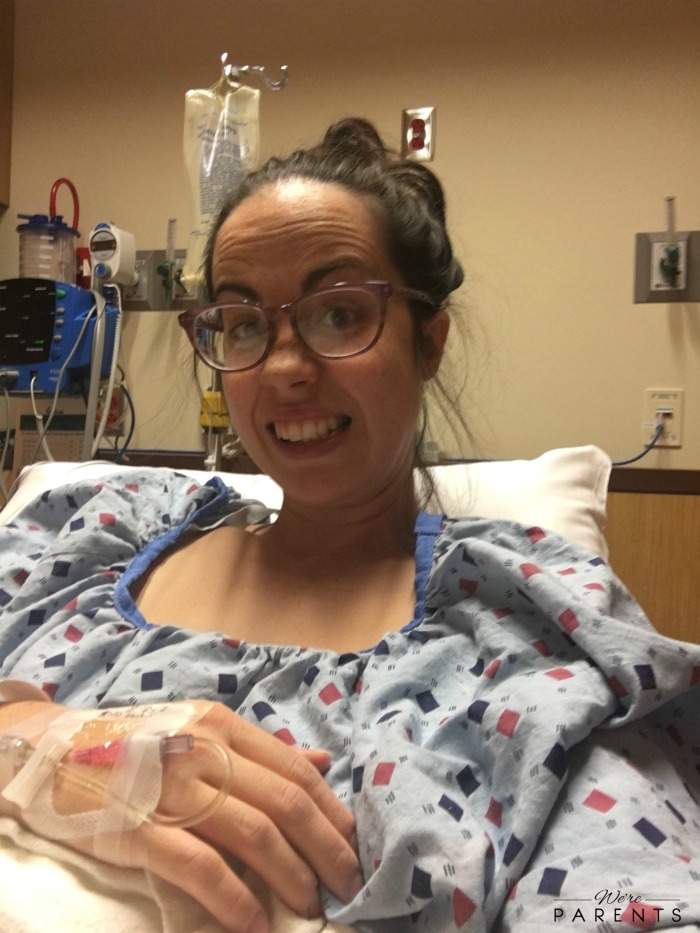 It was around 12:30pm before I would be taken into surgery. The anesthesiologist came in and said they would be putting the medicine in my IV to knock me out. I don’t remember going past the curtain and the next thing I remember was waking up so thirsty.

I remember feeling so much better than I imagined.  It felt like the worst period cramps I’ve ever had, but definitely better than what I felt like after giving birth. My throat (from being intubated) actually annoyed me more than anything. My entire stomach was orange from the iodine used to sterilize before surgery. I was swollen/bloated for about 4-5 days afterwards which is due to them expanding your stomach for the surgery. I was so tired for the next 48 hours. 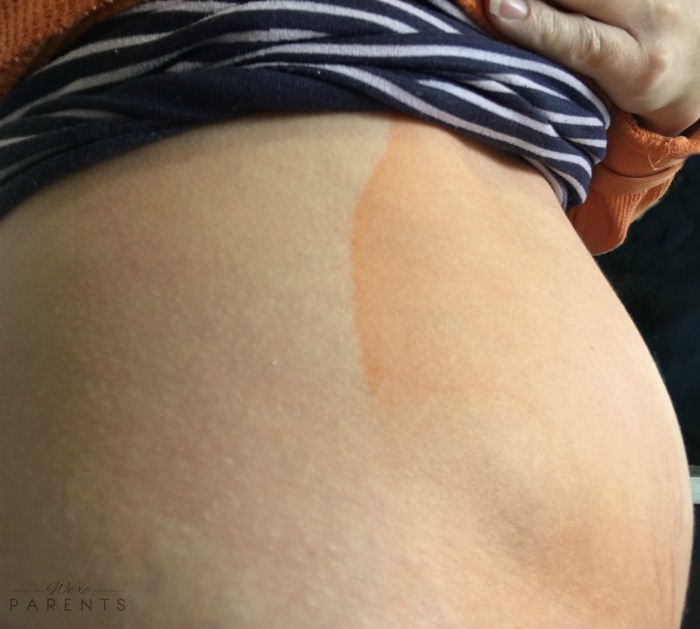 I’ll admit I was really nervous when I first saw my incision sites. They looked disgusting to me. I was going to have these horrible scares for the rest of my life. Much to my amazement, I barely have anything now. 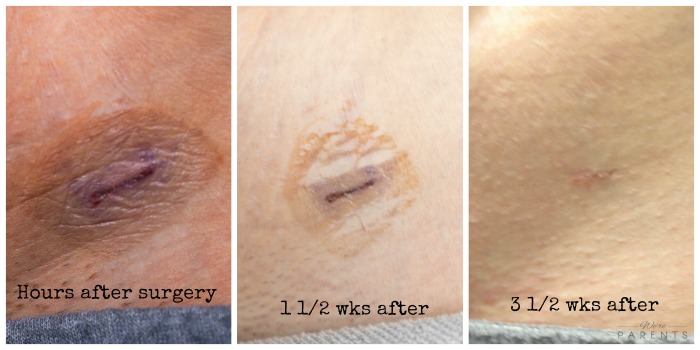 There were some day that looked worst than others.  Dermabond, a surgical glue, was used instead of stitches, so when that started peeling I felt like I looked like someone off of a horror movie. 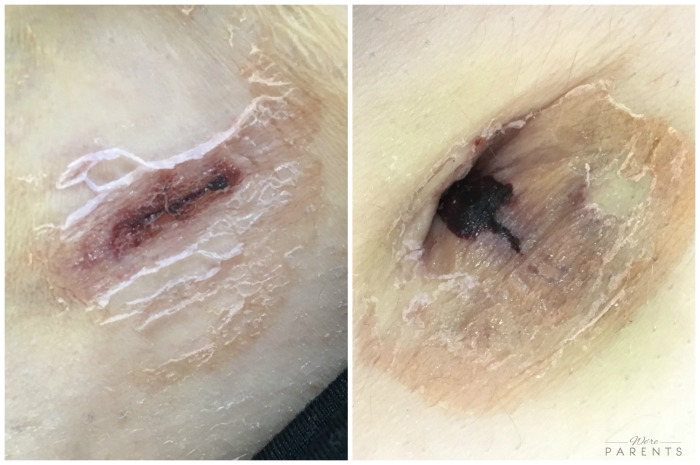 Other than my scars, I was advised not to shower for 24 hours after surgery, afterwards I could shower, but not bathe. No driving until I felt comfortable moving my legs to switch back and forth. I did drive a week after surgery and the seatbelt irritated incision sites, but I’m great now.  I could not lift more than 10lbs and no intercourse for 2 weeks.

Full transparency – I tried my best but had to lift my toddler here and there, she was an awesome sport during the recovery though and did so much by herself, like climbing into her highchair or up on the couch without me asking.  I did sit with a pillow across my stomach when sitting or laying down in bed. It was the only time it really hurt was when one of the girls accidentally hit one of the sites.

We are now just shy of one month post surgery and I am amazed how I feel.  You can barely see any of my scars. I have no pain from any of them, and most importantly I no longer have the fear of getting pregnant again (though Andrew has definitely asked what if they didn’t do anything and just said they did —thanks babe).

We are so happy with our decision.

Thank you for reading through our #RoadtoTubalat30 journey.

Feel free to tweet us at @wereparents or e-mail us at info@wereparentsblog.com if there’s any specific questions that weren’t answered that you’d like to know about.

Don’t have time to read the whole series now? Pin it to read later. 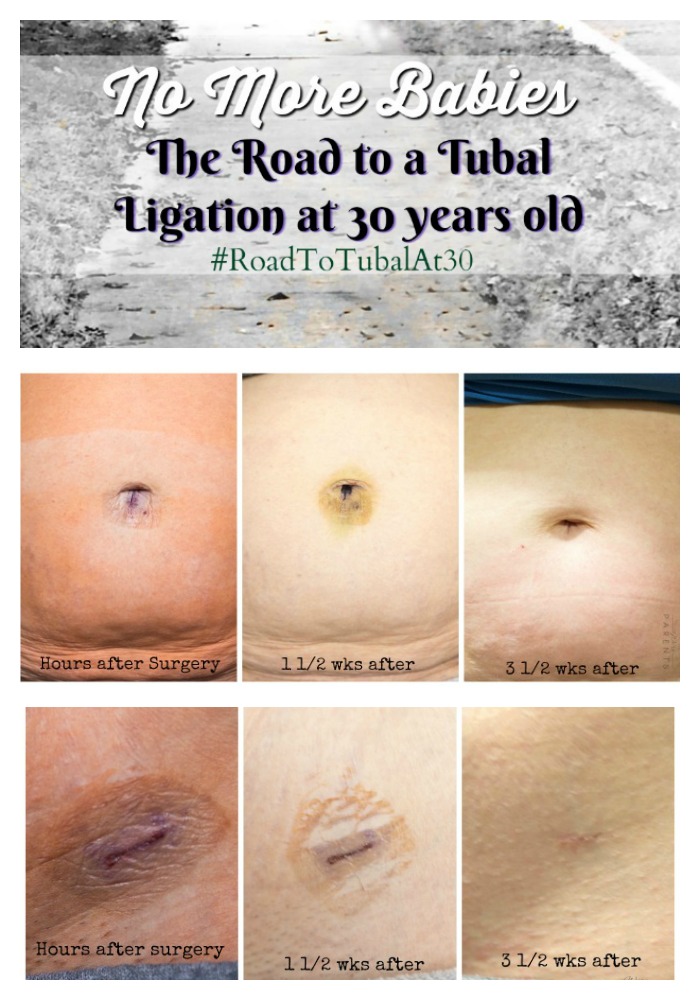 Worries, Doubts and Fears about a Tubal Ligation #RoadtoTubalat30

That Time We Almost Had a Baby in the Parking Lot

What do you REALLY need for breastfeeding?
« Whipped Cream Marshmallows
DIY Ornaments for Kids »