Move over Cool Whip. Learn how to make homemade whipped cream. This healthy alternative to the tub you are used to buying. You only need 3 ingredients for this tasty treat! 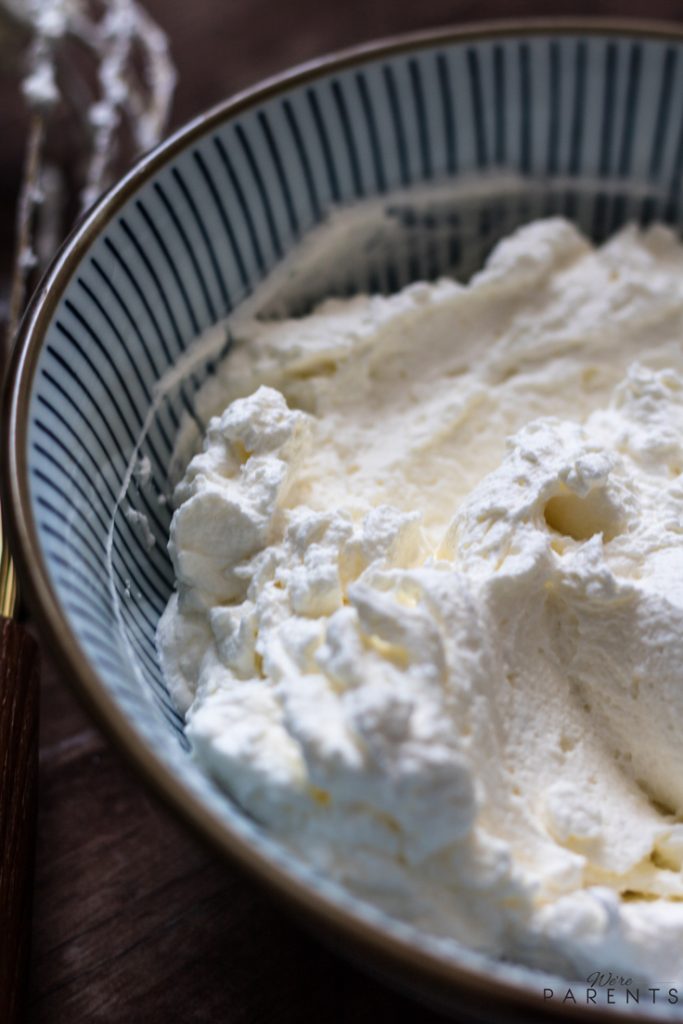 Growing up Cool Whip was one of my absolute most favorite things.  From the tub or can, I could literally shovel it in my mouth.  I would always drive my mom crazy because I would try to sneak spoonfuls out of the tub and she needed the whole container for whatever dessert she was making.  When our daughter was born though, we started watching what we were eating and I realized that I could be making my own homemade cool whip from scratch.  Not only was it healthier, but it actually tastes better, too.  Say WHAT!?

Is there a difference between cool whip and whipped cream?

Cool Whip is an artificial alternative for making whipped cream.  Whipped cream is the process of whisking or beating heavy cream until light and fluffy and sweetened with vanilla and sugar.

Some may ask, “why not just buy Cool Whip (or ReddiWhip can)?” That’s because the ingredients in Cool Whip tub contains the following: water, hydrogenated vegetable oil (coconut & palm kernel oils), high fructose corn syrup, corn syrup, skim milk, contains less than 2% of light cream, sodium caseinate, natural and artificial flavor, xanthan and guar gums, polysorbate 60, sorbitan monostearate, sodium polyphosphate, beta carotene (color). That’s more than 15 different ingredients! Half of which I have no clue what they are or how to even correctly pronounce them.  Why would you ever want to put that into your body?

Alternatively, the ingredients in homemade whipped cream are: heavy cream, vanilla, and sugar. That’s it. 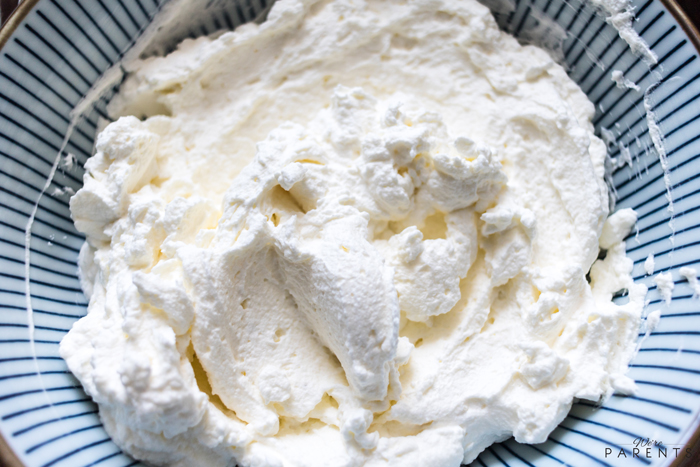 How do you make whipped cream?

A homemade whipped cream recipe consists of whisking vigorously with a whisk or beating with a mixer heavy cream until light and fluffy clouds begin to form. Halfway through you add vanilla extract and white sugar. The end result tastes better than any store bought tub or can can compare. You do have to be careful that you don’t whisk or beat too long or you will end up making homemade butter. 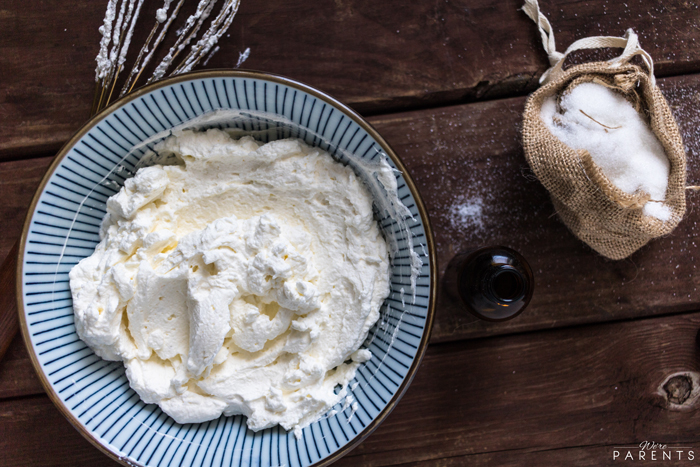 Can I Make Homemade Whipped Cream In Advance? 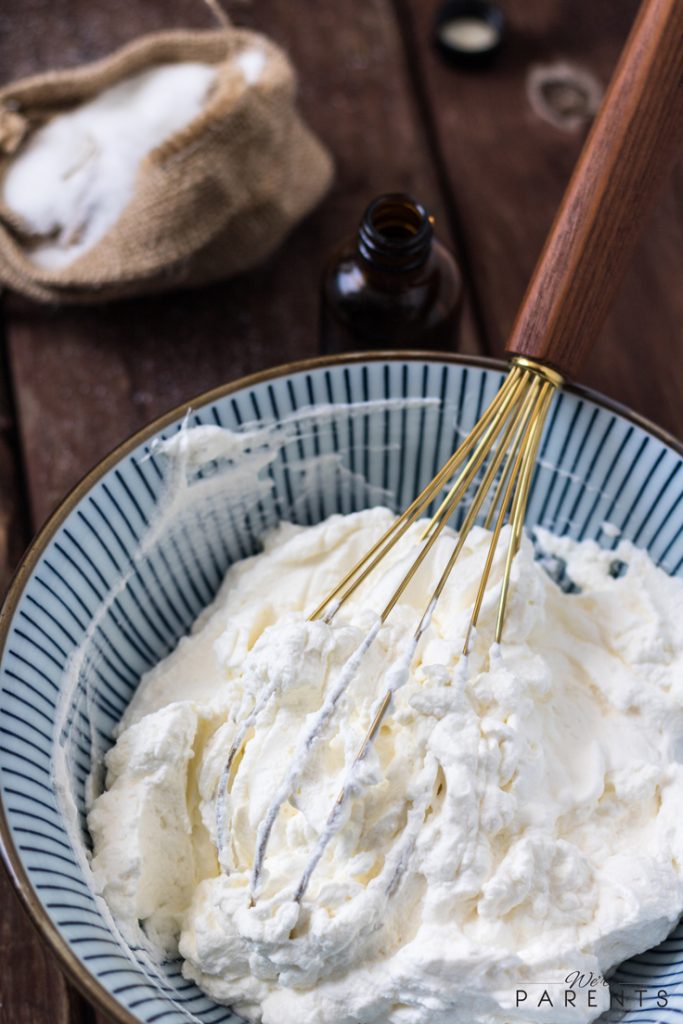 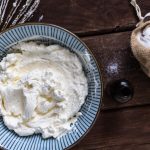 Move over Cool Whip. This homemade whipped toppings is a healthy alternative to the tub you are used to buying. You only need 3 ingredients for this tasty treat!

Pin this Homemade Whipped Topping Recipe to Pinterest and save for later!

This post was originally posted on 6/17/2014. Same great recipe, but our photography has greatly improved. 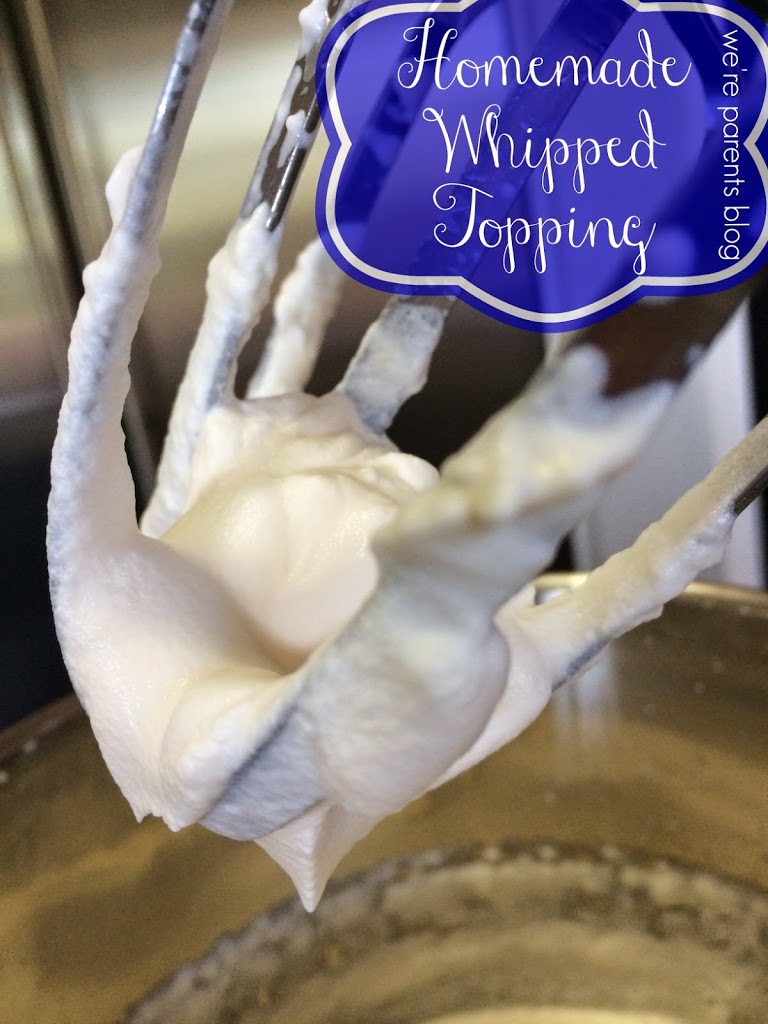 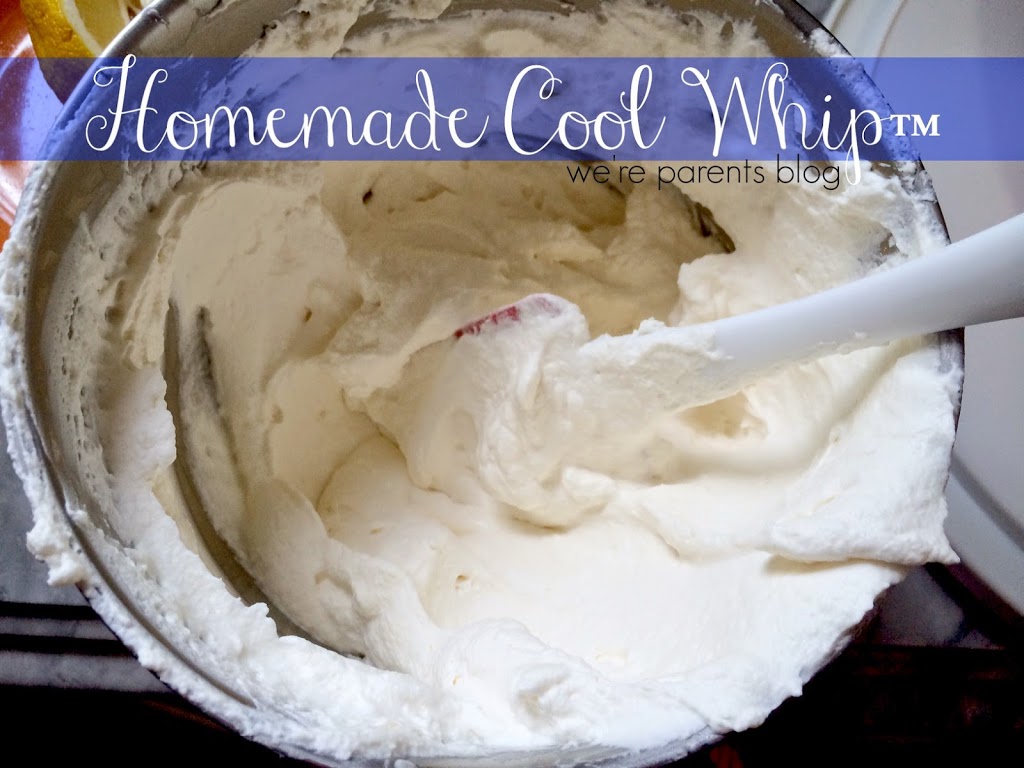 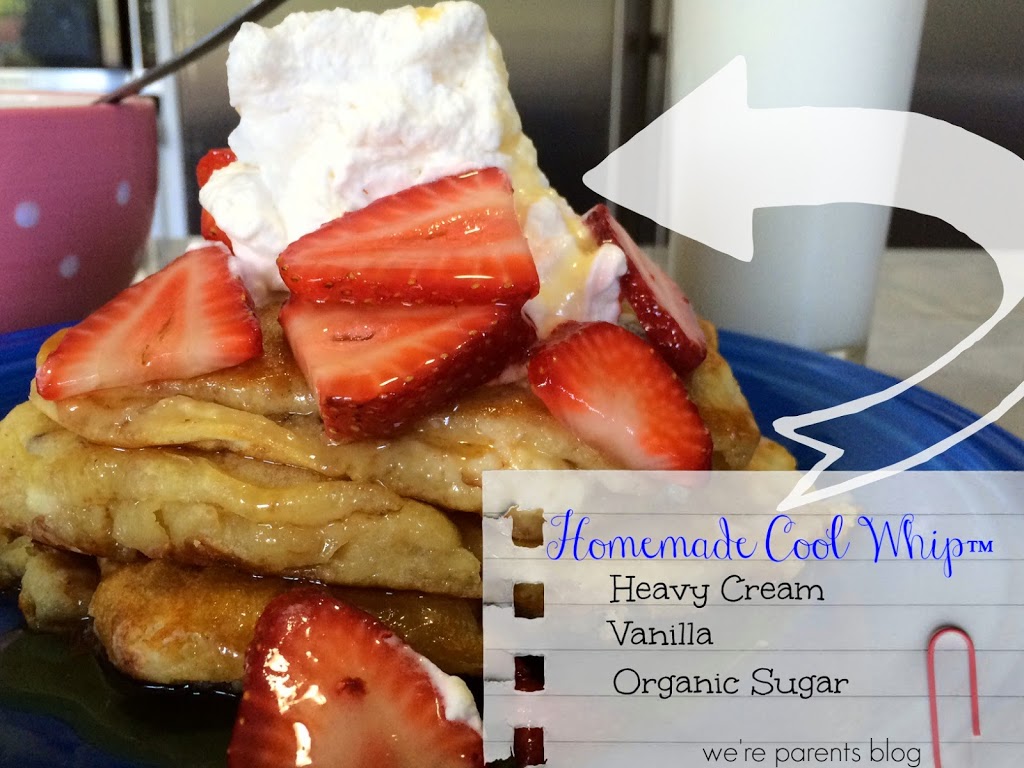 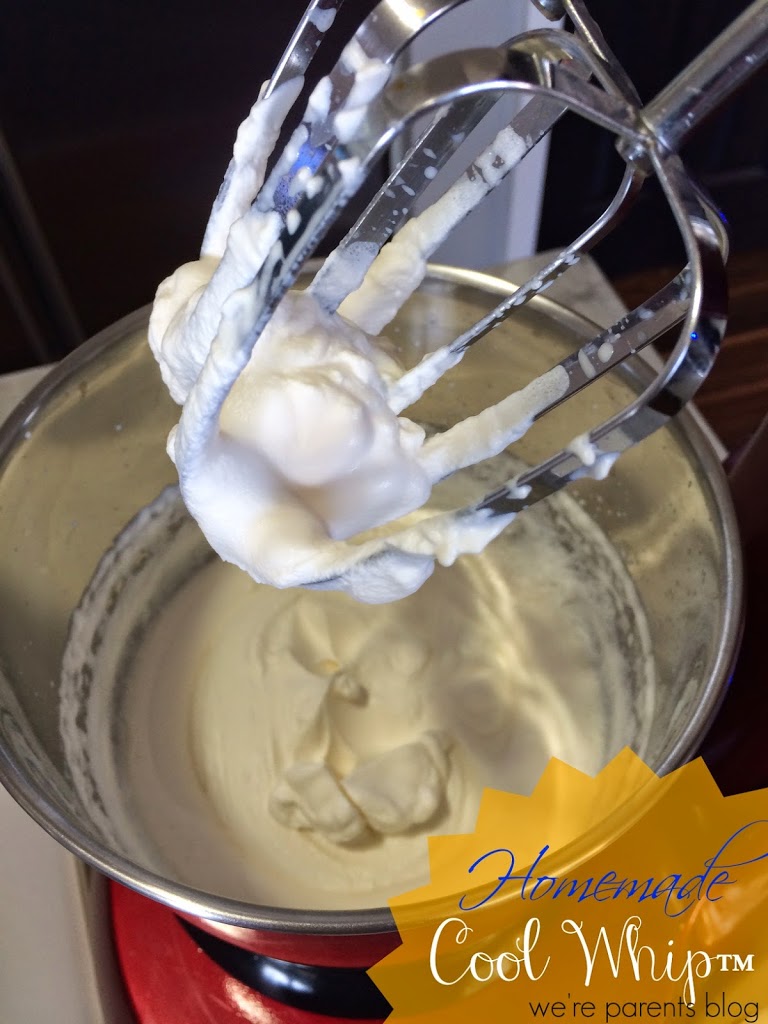 This post is part of a mom series we did called Time for Mom. Check out some other fun family-friendly posts from some of our friends! Rachel at My Mini Adventurer  and Brie at A Breezy Life

This homemade Honey Mustard BBQ Sauce Recipe is the best mustard based bbq sauce recipe you can find!  Simple and Delicious sauce for marinating, dipping, and more! 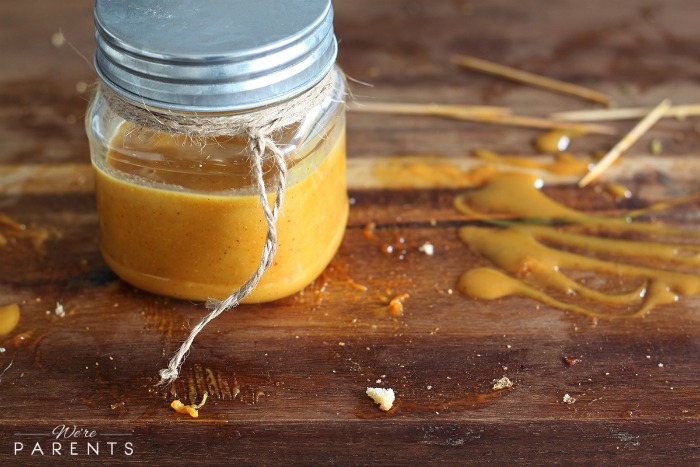 While growing up, my sauce dipping didn’t really expand beyond ketchup or mustard, I finally started experimenting with more sauces in college.  Truth be told, until I was in my 20s, the thought of anything BBQ sauce seemed so gross to me.  Who really knows why! Honestly, if I had to guess, it was probably one of those things that my mom didn’t like again.  My friends couldn’t understand why I didn’t dip my nuggets in BBQ or honey or sweet and sour sauce.  But nope, just ketchup please.

Around 3 years ago, I ran out of bottled BBQ sauce and freaked out since I needed it for something I was making for dinner.  Someone suggested I make my own.

Duh!  Make my own BBQ sauce recipe!  I had no idea how simple it was to do so and yet to this day, I haven’t purchased another bottle of BBQ sauce at the store.  Then recently, I had the brilliant idea to combine honey mustard and BBQ sauce together. 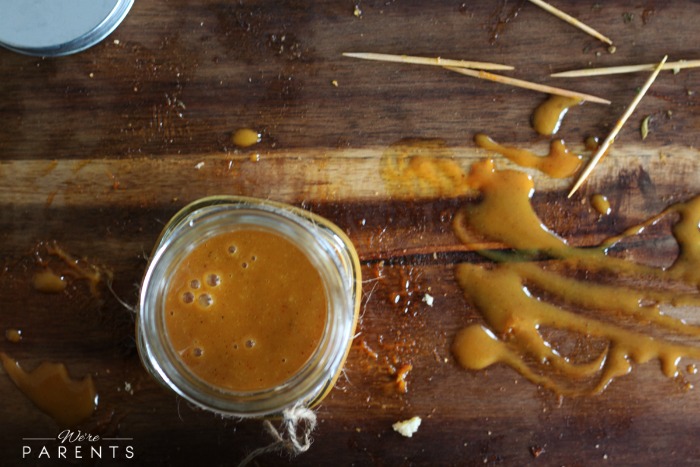 O-M-G…The result was phenomenal. Our toddler devoured the sandwiches that we put it on and Andrew, the world’s pickiest eater who won’t touch anything that mentions mustard, tasted and loved it too.

This sauce would be fantastic on grilled chicken, pulled pork, as a sauce in fish tacos, spread over a salad in the summer and so much more.  The possibilities are truly endless. 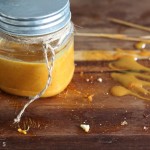 This homemade Honey Mustard BBQ Sauce Recipe is the best mustard based bbq sauce recipe you can find!  Simple and Delicious sauce for marinating, dipping, and more!

We hope you enjoy this sauce as much as we have!  We store our leftover sauce in the fridge in mason jars. What’s your favorite sauce?  Comment below and let us know! 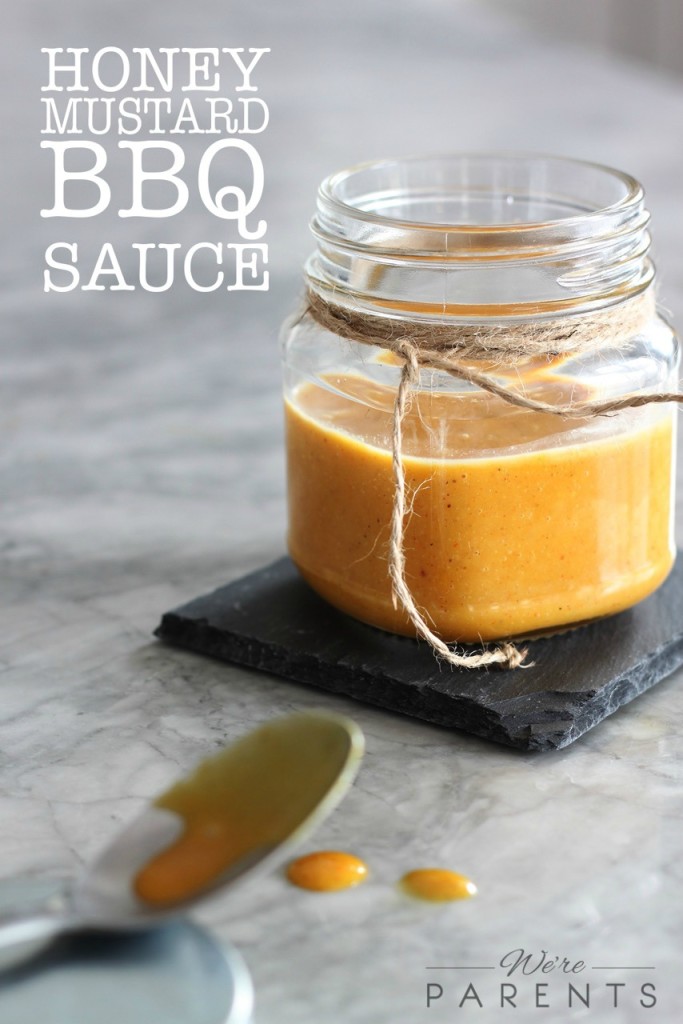