When my sister and I first decided to have a joint baby shower together back home, one of the things we really wanted to do was a gender reveal.  We both thought it was such a such cute idea.  What we didn’t realize it that not only were people going to want to KILL us, but keeping the secret would be so hard! For the most part, we kept it a secret…I slipped and told my mom about a week after I found out, even though I continued to deny I ever slipped until the reveal and my sister very noticeably slipped the day before the baby shower, also to our mom.

The most difficult part was deciding how to do the gender reveal.  There are tons of ideas on Pinterest, but we decided to go two different ways (and thank God we did).

First, we had decided to do a reveal cake.  Essentially you do a layered cake (we did 9 inch round cakes) and between the 2 layers you put either pink or blue icing.  We went we a buttercream icing and used food coloring for dye. 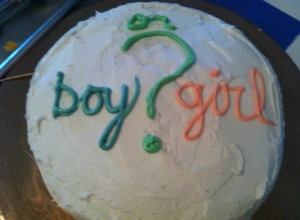 We cut into our cakes with everyone around…. 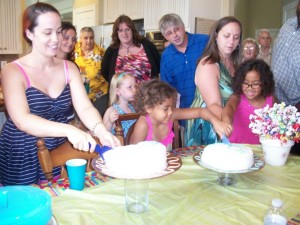 And revealed that both of us are having girls!!!!!

(sorry it’s hard to see the pink in the pic). 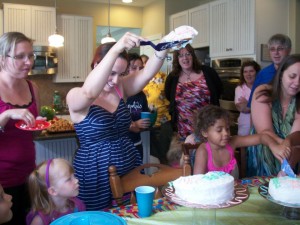 A few days before the shower we decided that since there would be a lot of kids at the party (this was very much a family affair) we could have the kids to the reveal.  We took black balloons (you can use any dark color that you won’t be able to see through) and put pink confetti in them.  The idea was that we would go outside and have the kids play a game to see who could POP the balloon first and reveal the gender by having to Pop them by only using their butts.  (**sorry I don’t have pics of the balloons since we weren’t able to do this).

Luckily, we continued to go with the gender reveal cakes as it decided to rain the day of the shower and we weren’t able to go outside.  While we could have done it inside, I don’t believe the clean up would have been as fun!!

Everyone swore I was having a boy, except for like 2 people, so they were so surprised that it was a girl 🙂

Did you do a gender reveal?? How did you do it?