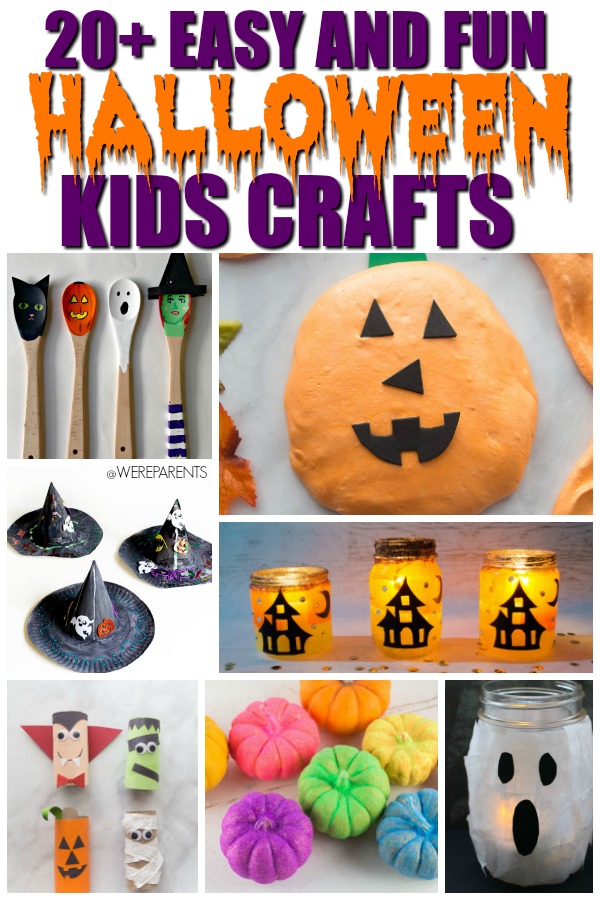 Some halloween crafts for kids call for things…Ahem, glitter…that literally no parent on the face of the earth feels like dealing with. Other halloween crafts take hours, and quite honestly, no one has time for that either. However, you still want to spend time with the kids every holiday making something memorable with them. 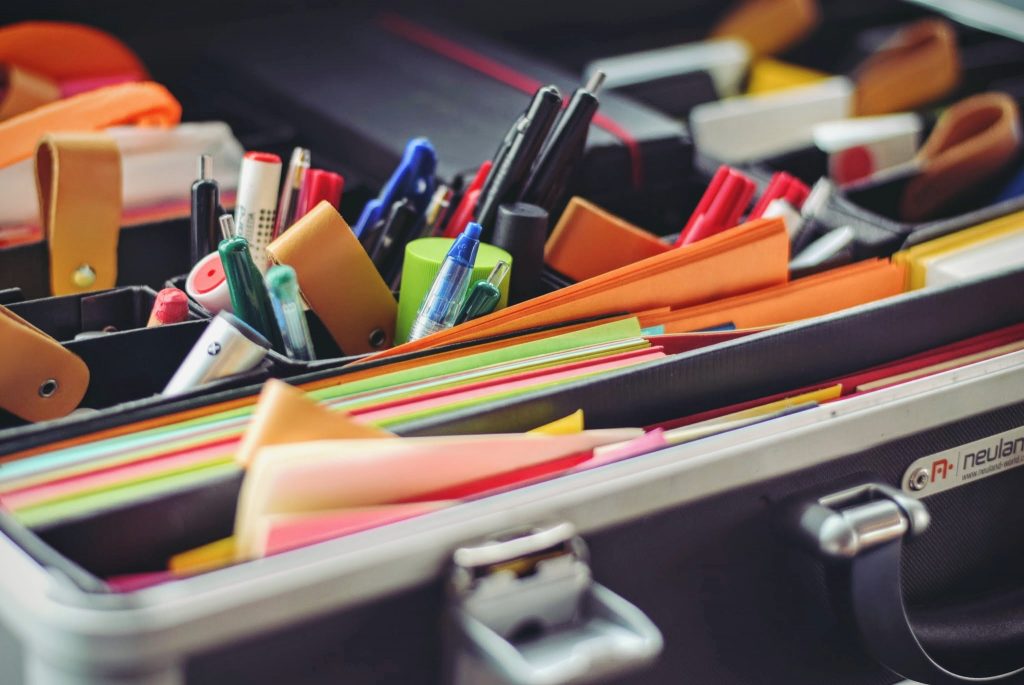 What materials do I need on hand for Halloween Crafts?

While every easy Halloween craft is going to be unique in what it calls for, there are definitely some specific craft supplies that you should always keep on hand. Not only will these help you with Halloween Crafts, but it’s great to have for most kids’ crafts that you may be doing.

Obviously, there’s so much more that you could have, but this quick list is something that you should always have on hand.  Doing so will mean that you will be able to do most holiday crafts, including the easy Halloween crafts for kids we’ve listed below.

What is a good way to preserve my child’s holiday crafts?

Whether it’s Halloween crafts or any other season, as parents, it is easy to want to hold onto everything. Out littles ones created something so unique to them and it’s adorable. Parents always want to remember their kid’s when they were little, thus want to hold onto as much as possible.

In a perfect world, you’d be able to keep everything your little one(s) ever made.  Unfortunately, you’d be looking at an entire room just filled with crafts.  Here’s three ideas for preserving your child’s holiday crafts. 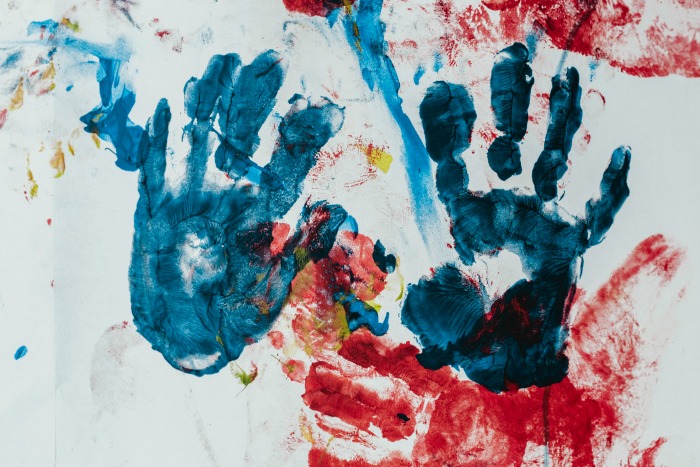 Unfortunately, as much as you want to keep every single little thing each child brings home, it’s just not feasible. Especially, if you have a child that thrives on being artistic.  Somedays there could literally be dozens and dozens of pieces of artwork. Luckily, there are alternatives to saving every single craft.

Some great ideas that you can do are:

At the end of the day, don’t be afraid to toss the artwork either. 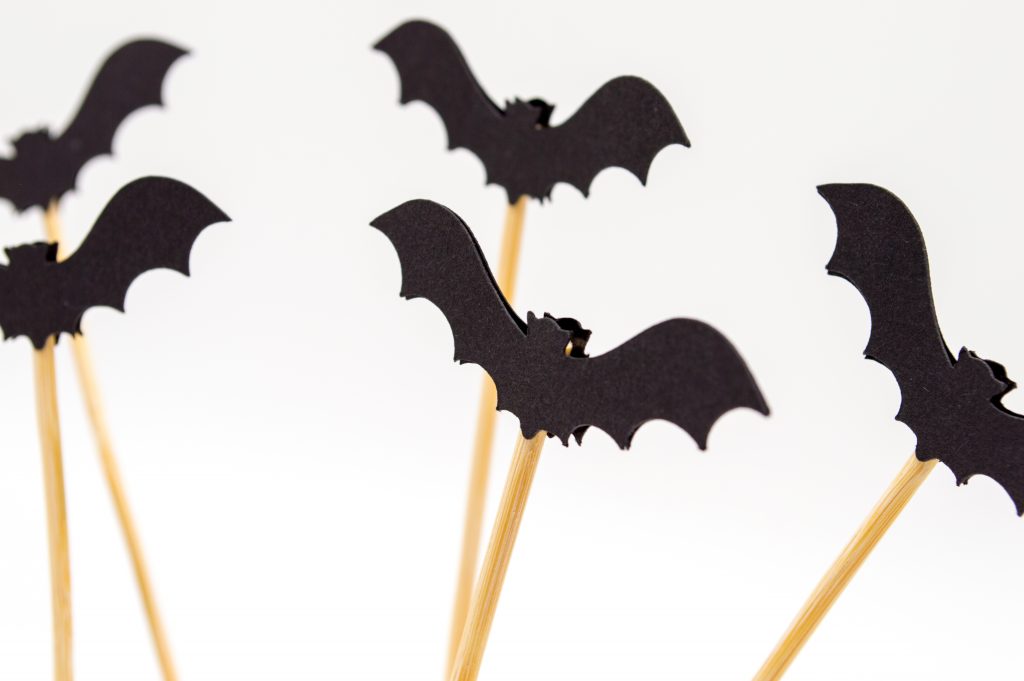 Looking for more Halloween posts? Check out our Halloween Safety Tips and Creepy Halloween Food for Kids below! 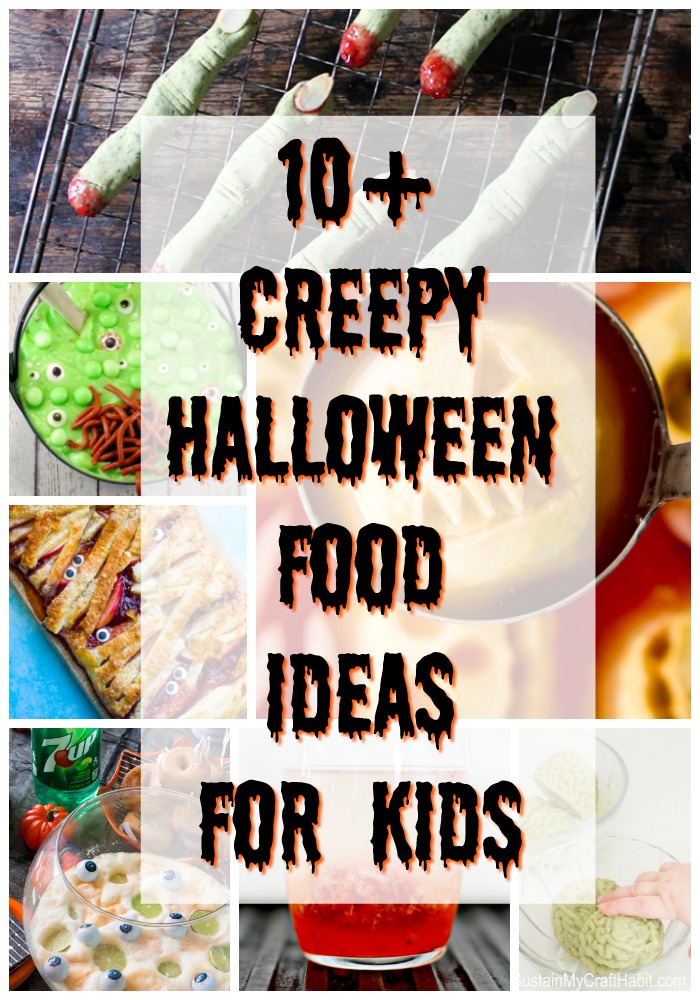 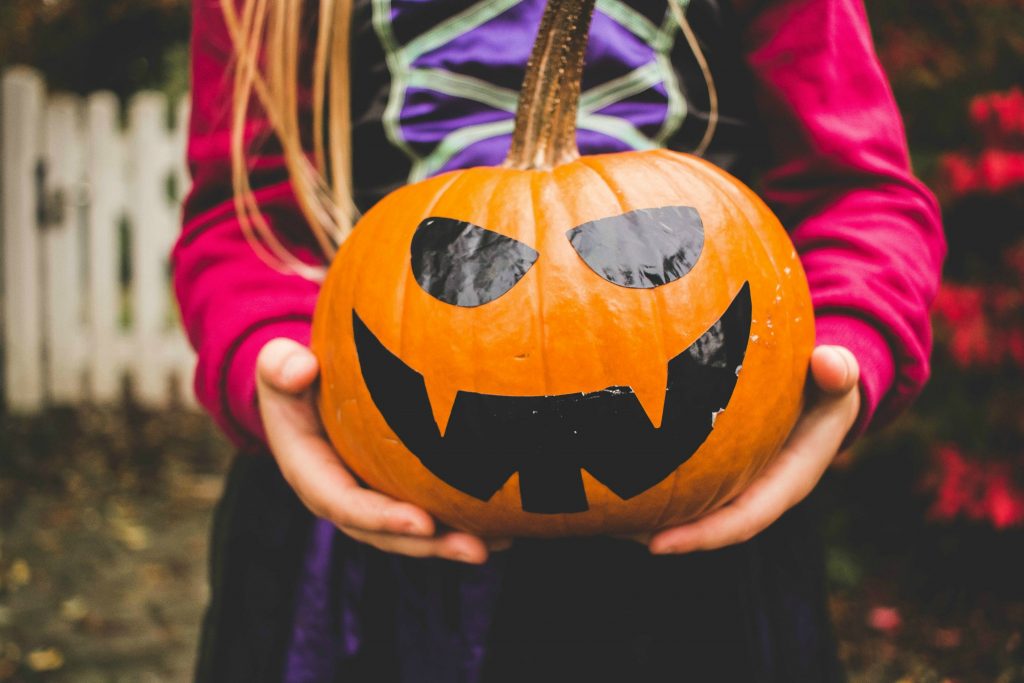 Halloween is such a fun and exciting time. If you ask most kids, Halloween will be likely in their Top 3 holidays. I mean there’s a lot to love. Kids get to dress up like their favorite character from the past year. There’s candy, hayrides, haunted houses. Laughter. And so much more. What’s not to love?

Truth be told, as fun as it is for kids and parents alike, there is a lot not to love. Halloween Safety Month is all about alerting parents to the dangers that occur during Halloween season and how to keep your children safe.  Many of these Halloween safety tips should be discussed with your children all month long, but especially the week leading up to Halloween.  It’s also important to discuss Halloween safety at your children’s school or co-op if homeschooled, to ensure everyone is always safe.

No matter your child’s age, these Halloween Trick-or-Treating Safety Tips apply to all families:

Thing change when you become a parent to an older child. They want to do things on their own and usually with friends.  Due to that, a unique set of Halloween Safety Tips for older children come into play: 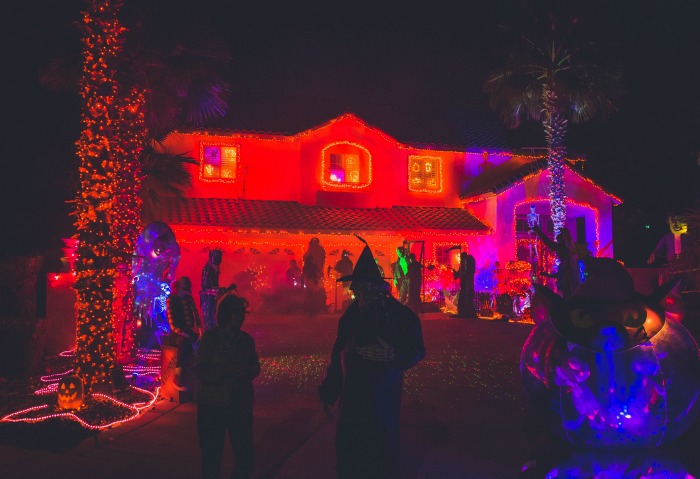 Typically, parents ask their children what they want to dress up as, the child tells us, we buy the costume, and that’s the end of it.  There’s not a lot thought provoking discussions around Halloween costume safety. However, you do want to ensure that the costume you choose to buy or make doesn’t pose a safety hazard.  To do that you want to make sure:

Safety Tips for Drivers on Halloween

If you plan to be driving during Halloween hours, you’ll want to follow these safety tips for drivers on Halloween:

Safety Tips for Homes during Halloween

Lots of decorating happens around your home to get in the Halloween spirit! Don’t miss these safety tips for your home during Halloween:

Food Allergies present a unique situation when celebrating and partaking in Halloween activities. Make sure you have safety tips for food allergy families during Halloween:

Also on the note of food allergy families, even if you aren’t a family affected, you should make sure to have a few (or all) of your treats be food allergy friendly. There’s dozens of non-candy Halloween treat ideas available to help.

Hopefully these Halloween Safety Tips were valuable to you!

Did we miss something?  Let us know in the comments below. 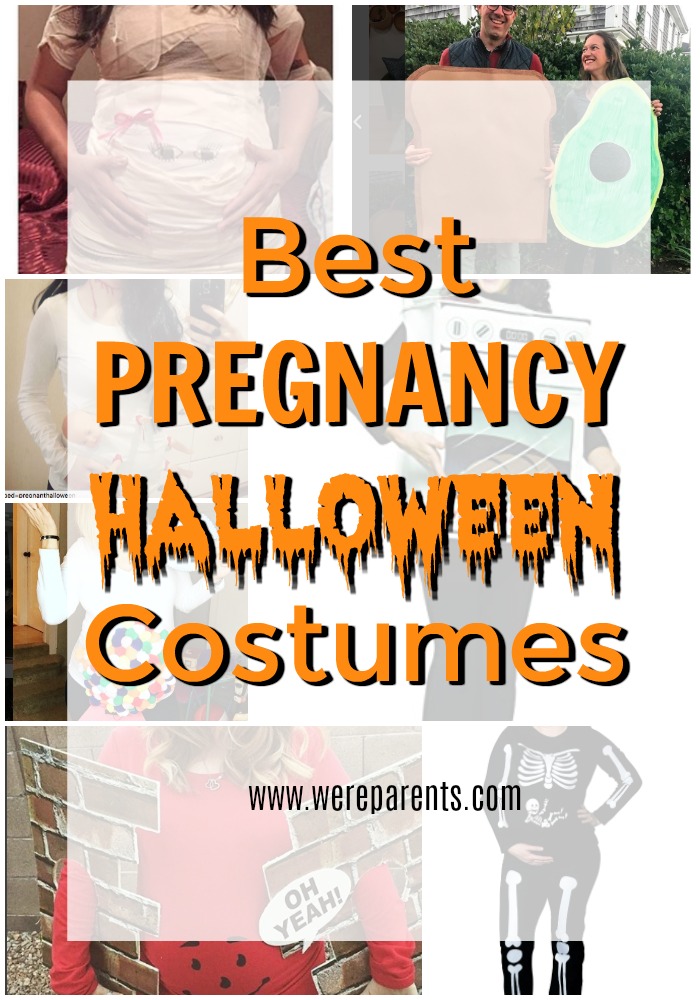 Halloween is right around the corner.  I admit that even though I was pregnant during Halloween with both of our girls, I never dressed up. Not even one of those pregnant halloween shirts!  With our first I was super big, just a few weeks from our due date. Then, with the second, I only knew for like 3 weeks and we weren’t ready to announce.

Either way, if you are here, you are likely in the opposite boat and you are looking for the best pregnancy halloween costumes inspiration.  Have no fear. We are going to break it down and give you some really amazing ideas!

Doing a halloween pregnancy announcement is such a fun way to tell your family and friends about your new bundle of joy! There’s so many ways that you can announce but costumes giving a subtle hint are a great way to get a big reaction.

If you want to remain comfortable, you can stick with this super easy baby skeleton t-shirt and pair is with skeleton leggings. Have dad dress up too if you want to do a pregnant halloween couples costume theme (more on that below).

A few years ago Jessica Simpson dressed up like a mummy to announce her pregnancy.  Grab a mummy inspired costume to do the same!

It’s so fun to include both you and your partner in your halloween costume no matter if you are announcing or just dressing up. 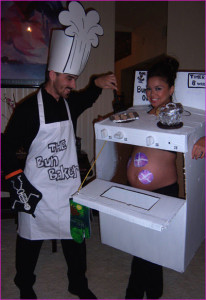 If you don’t feel like wearing an actual costume…Let’s be honest, sometimes pregnancy just does a number on us…you can wear couples skeleton tshirts or just cute halloween shirts.

How about breakfast? You could go as avocado and toast or bacon and egg breakfast combo! If your belly is more round for the egg option, you could get out the yolk part from the costume and wear a yellow shirt underneath to give yourself more room. If you had a bigger family, other suggestions could be a carton of milk (or juice), hashbrowns, pancakes, etc!

Sometimes you just want to be cute.  Here’s some ideas we found.

The Kool-Aid Jug!  Seriously how creative!

How about a gumball machine? You’d just need a shirt and a whole lot of pom poms.

How about a Pumpkin Farmer?  This is so cute, especially for the fall!

Old t-shirt, cheap dollar store baby doll and some fake blood will freak everyone out.

Again, this could be under the couples Halloween Pregnancy costume idea, but the idea of the milk man and mom are hilarious.

Which ones do you think are the best pregnancy halloween costumes? Let us know!