One of the best things I’ve discovered since starting to coupon is that I can spot some great deals.  Usually if you go to the supermarket during the middle of the week you can find Managers Specials on meat. These are usually marked with bright red or orange stickers.  If you just ask someone about when they mark down the meat, they will usually tell you.  This is a great way to stock up on meat and also a much more cost efficient way to try meat you have never cooked with before.  (You won’t feel so bad if you screw it up–which I do often).
Which brings me to my next dish.  I found these Italian Sausages on sale my local grocery store for under $2 and knew I could come up with something great.  The only problem was I had never cooked with Italian Sausages before.  On the day I decided to use them, I was having a hard time finding a recipe or thinking of anything I could make.  Finally, I saw this recipe.  Next problem, it was already 4pm by the time I found it.  I didn’t have time to slow cook it and had no other ideas for dinner, so I had to improvise wing it. 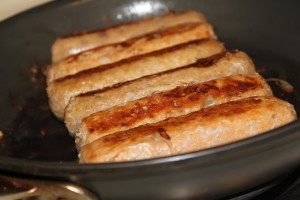 Start by greasing a pan with cooking spray and then browning the sausages. 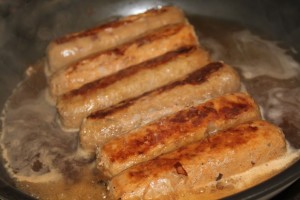 Next, add a 1/2 cup water to the pan let the sausages boil on medium high. 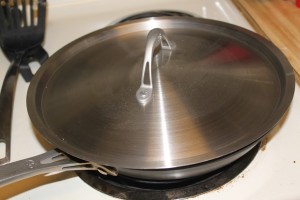 You will want to cover the sausages in the pan while you boil them. Once all the water is gone, you can remove the sausages.  About 7-10 mins. 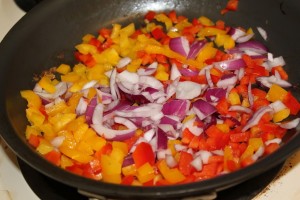 Next, remove the sausages to a cutting board and finely chop each sausage into bite size pieces.  While you are doing that, using the same pan the sausages were in, respray with cooking spray lightly and add your chopped peppers and onions. Cook for about 5 minutes, turning occasionally, letting them get a nice color. 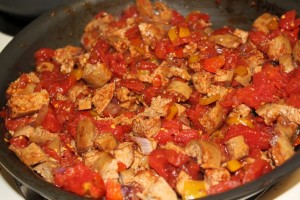 Next, add the sausage back into the pan and add the can of tomatoes, drained.  Cook for another 5-10 minutes or until everything has heated through.
Serve on top of rice.  It’s so simple and delicious! 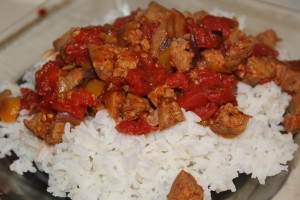 **Note:  Like I said at the beginning, this was my first time cooking Italian sausages or even cooking this meal at all.  I take my fiance’s opinion very seriously, and he said while he enjoyed the dish overall, he would have liked it better if there had been more of a sauce with it.  When I try this again, I plan on leaving in about 1/2 the juice from the tomatoes instead of draining the entire can.
0 from 0 votes 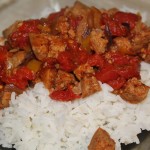