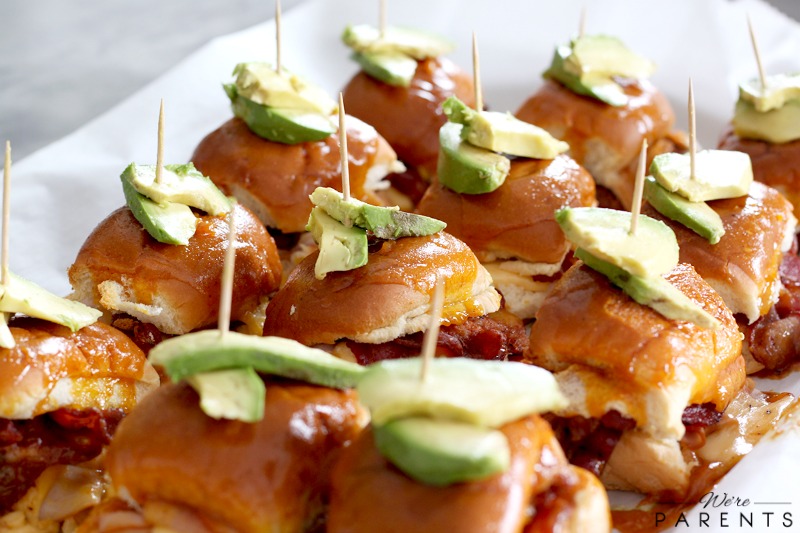 I used to always struggle knowing what to take to get togethers with friends or family. I always want something unique and memorable and I try not to have anything that I think someone else might bring.  When my sister and I were planning our joint baby shower 4 years ago, we decided on a menu which included these awesome Ham & Cheese Sliders that she had made a few times.  They were a big hit at the party and Andrew asked me to put them on our dinner menu rotation at home.  Since then, I’ve been taking sliders everywhere we go.  I love that they are so simple to make and don’t take a lot of time. As a mom of now two beautiful girls, both of those things are so important to me. 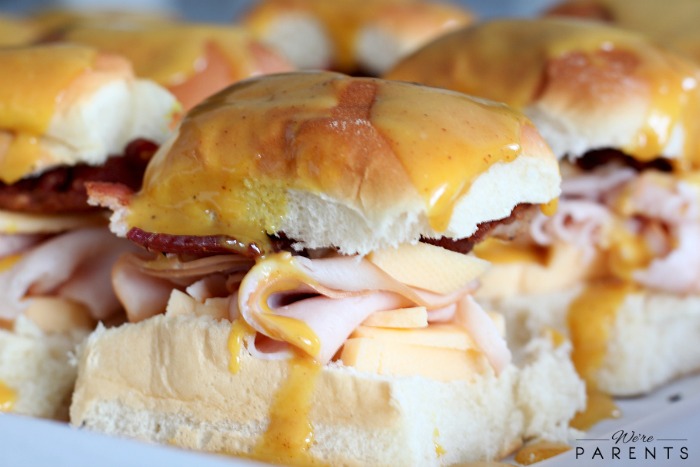 I’ve been thinking of new ways to make our sliders and we have a few favorites now, but these BBQ Honey Mustard Bacon Turkey Sliders are hands down our new favorites.

Watch them being made:

You start with a Hawaiian roll, add two very thin slices of Gouda, a crispy piece of bacon, and two slices of Oscar Mayer Selects Natural Applewood Smoked Turkey Breast.  The Oscar Mayer Selects Natural line has no artificial ingredients and still tastes great, which makes me feel great about feeding it to our girls. Top that with a homemade BBQ Honey Mustard sauce and bake. Once it’s finished you add a small slice of avocado and voila! A perfect slider that will have you be the star of the next get together amongst both kids and adults. 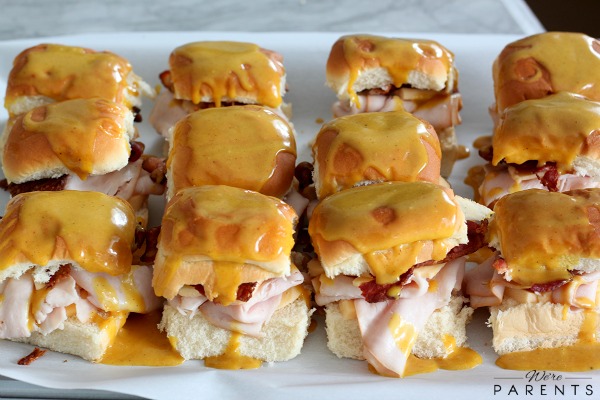 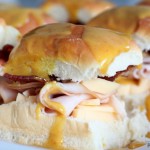 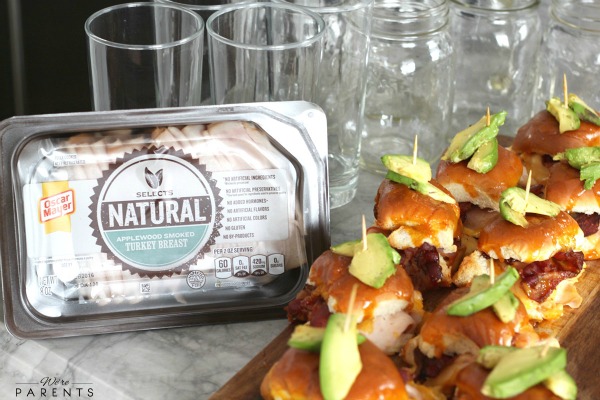 We loved the Applewood Smoked Turkey Breast from the Oscar Mayer Selects Natural line and we can’t wait to make more delicious recipes with the rest of their line including: Slow Roasted Turkey, Rotisserie Season Chicken, Applewood Smoked Ham, and Slow Roasted Roast Beef. You can learned more about the Selects Natural line and all other Oscar Mayer Products on OscarMayer.com, their Facebook page, or on Twitter at @OscarMayer.  Don’t give up the good stuff!  Enjoy quality deli cold cuts that your family deserves!

Which variety do you want to try?  Leave a comment below to let us know! 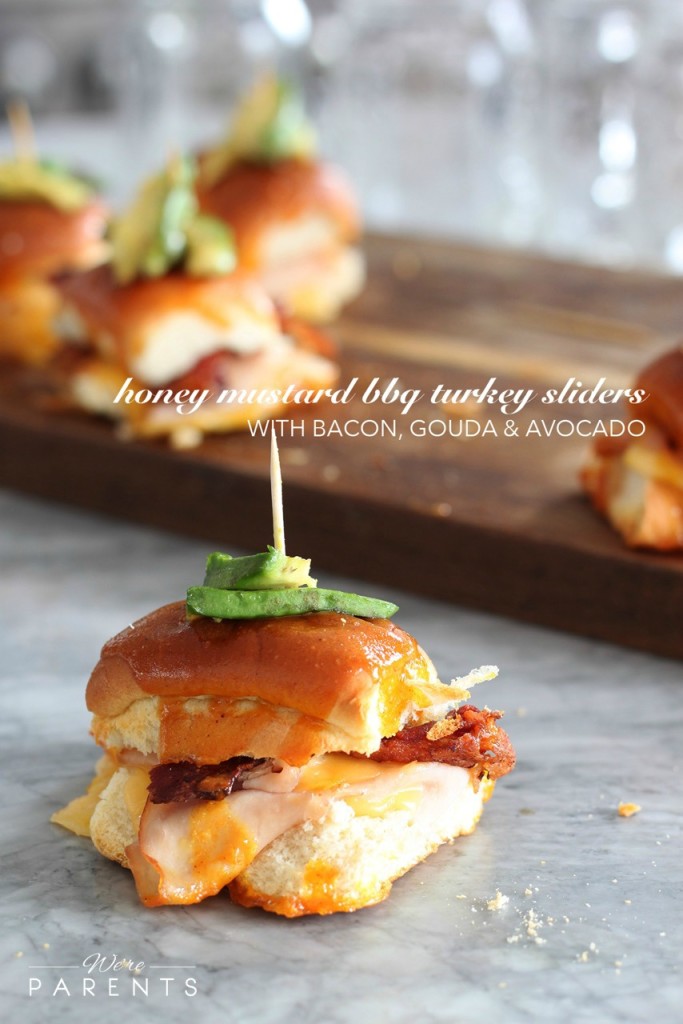 I was selected for this opportunity as a member of Clever Girls and the content and opinions expressed here are all my own.

After my sister and I decided on our baby shower theme, we had to figure out what type of food we were going to serve.  We had seen a few POPable sandwich recipes on Pinterest, however, they typically called for poppyseeds and we couldn’t find them in the store, so we decided on just POPable ham and cheese sliders after coming across this recipe.  We made them a few different ways and finally found something that worked for us and they were a huge hit at the baby shower.  What made me even happier, was that once Andrew and I got home, he asked for them again.  I love simple dinners, so being able to add this to the rotation is a huge success.
Gather all of your ingredients. (I have to say—while you can use any type of ham for this recipe, I have enjoyed black forest ham the best). 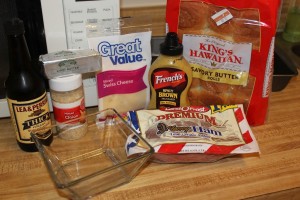 Combine melted butter, spicy brown mustard, Worcestershire sauce, and minced onion in a bowl until well combined.  It’s important to make sure all the butter is completely melted and you want a thin sauce, not something that is thicker. 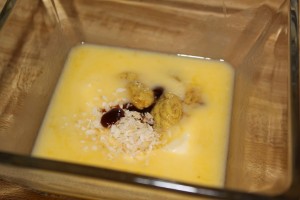 I prefer to have an assembly line type system for this as I feel it’s easier to do it this way…(maybe that’s just my OCD-ness–who knows).

I sliced the cheese into fourths and fold all my ham.  I use thinly sliced ham, folded in 4ths to make little triangles. 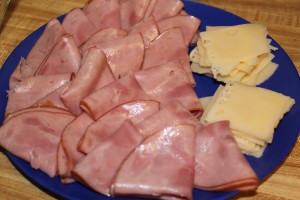 Set the bottoms of all the sandwiches in a 13×9 baking dish. 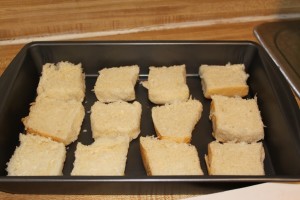 Put a slice of cheese on each one. 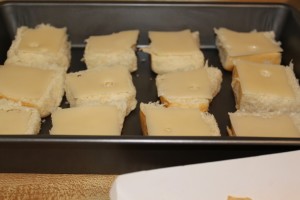 Next, place 2 triangles on top. 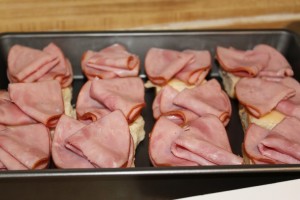 Place another slice on cheese on top 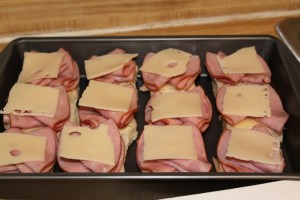 Followed by the tops of the sandwiches. 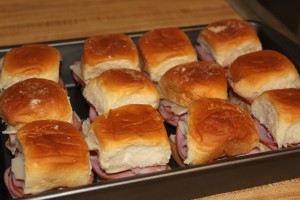 Spoon mixture evenly across each sandwhich. Cover and refrigerate sandwiches overnight.
**If you can’t wait to refrigerate it’s okay to bake them right away, but I have to admit, I’ve tried this numerous ways and refrigerating 6-8 hours is best.** 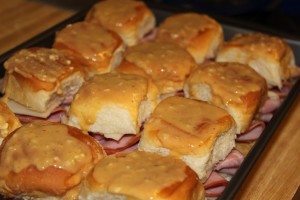 Remove cover, preheat oven to 350 degrees and bake sandwiches for 15-20 minutes until tops are somewhat crunchy.
*Do not overcook or the tops will burn 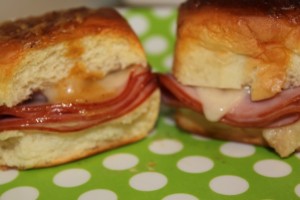 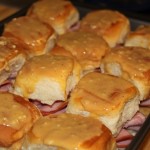 Print
POPable Ham and Cheese Sliders
Author: Larisha Campbell
Ingredients
Instructions
These ham and cheese sliders are super easy and yummy. Enjoy!
You might also want to check out our Popable Pizza Bites for even more fun!