You are here: Home / Home / The Scare #RoadtoTubalat30

Andrew and I had already decided that we wouldn’t be having any more kids.  After the ups and downs over the last year and a half, we couldn’t go through anymore stress to our relationship. We wanted a happy home with happy kids who were raised by both parents.  We knew another child would likely ruin that from happening.

For a week prior to this date, I was cramping and nauseous. Originally, I didn’t think anything about it. I was 16 months postpartum and still hadn’t gotten my period yet, so it had to be coming back and that’s why I was experiencing these feelings. After a week though, just for giggles, I decided I’d take a pregnancy test.  I had one left in the house from the time I became pregnant with the baby. I peed on the stick and walked away.  I knew it was going to be negative.  I was breastfeeding two kids, I was taking my birth control religiously, and I hadn’t had my period yet (yes, I know periods aren’t an indication of ovulation…but still).

I walked back in after the designated time period to a positive test. I immediately text my best friend this…. 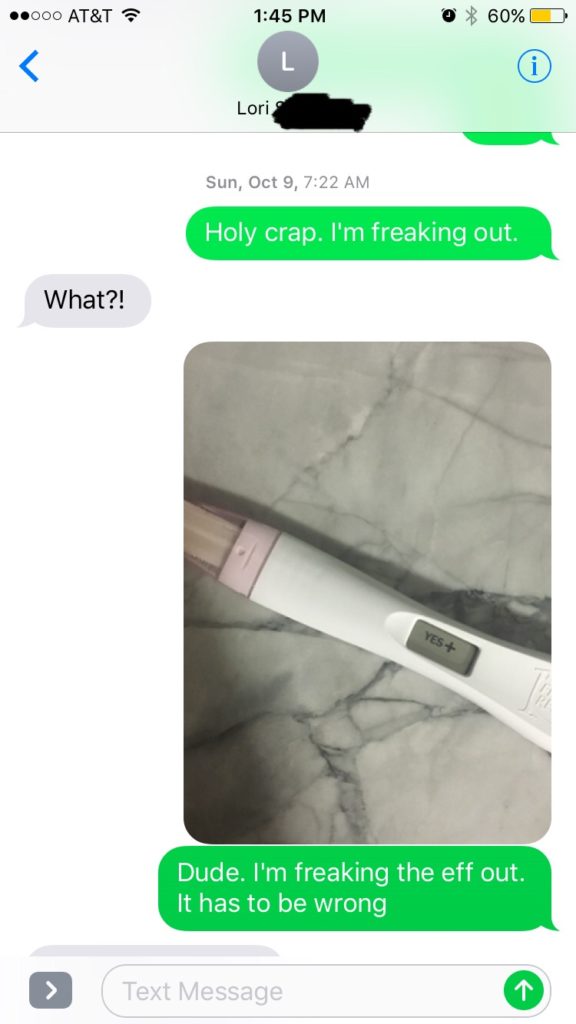 This wasn’t a “take a guess and let me know if you see a faint line” type of pregnancy test. This was a big, fat, digital YES.  Andrew had the same reaction when I told him. Holy shit, what happened. I immediately welled up with huge crocodile tears.  I remember telling him, “I can’t go through this again.” I knew we could not have another child, despite my never-ending love for my girls.

I went out and bought two more tests.  I took another one that evening and another the next morning.

Now, we were really confused.  How could I start processing these emotions if I didn’t even know? After the negative test that morning, I waited until my doctor’s office opened and called for an appointment.  Luckily, they could get me in the same day. The test in the office was again, negative.  The doctor told me it was likely a false positive, even though that’s insanely rare, especially with a digital test.  She recommended that I wait a week, and test again.

While I was there, I asked if we could talk about having a tubal done. I kid you not, my doctor literally bust out laughing when I said this. She said that was definitely an option, but gave me information about various IUDs as an alternative she wanted me to consider.

On November 2, I ended up going off my birth control for the reasons I discussed in our last post.  Within a few days of going off my birth control pills, I could tell I was feeling like a better person.  I spent the next few days thoroughly researching all of my options, asking for opinions, and just doing my due diligence.  Ultimately, I decided that a getting my tubes tied was the best option for my family.  I read and heard personal stories about negative side effects of the various IUDs, including unexpected pregnancies and that wasn’t something I was willing to risk. On November 7, I called to schedule for my tubal ligation. I was thinking in my head they would schedule it for sometime in the beginning of 2017.

The nurse came back on the line, “Can you do the day after Thanksgiving? The 25th?”

We scheduled my pre-op appointment for November 14th. The next 7 days were an extreme mixed bag of emotions.