*Disclosure: Affiliate Links contained in this post.  You purchase like normal, but we receive a small commission for your purchase.

Seems for many like this is a tough thing. For us it was a very simple decision. While Andrew had never considered or even heard of cloth diapering, I had him on board with how much money it would save us.  For others though, I know they don’t have it as easy as I did convincing their soon to be new dads to plunge into the cloth diapering world. While he does joke around and say “is this how you use them” as you can see in the pics below, he’s definitely on board! 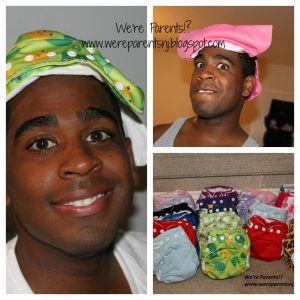 Money Saving Cost – This is hands down usually the easiest way to convince dad.  The average family will spend $2000-2500 on disposable diapers PER CHILD.  There are many considerations (such as brand and style) that go into cloth diapering, but the average family will spend between $400 and $800 on cloth diapering from birth to potty training.  Additionally, many times cloth diapers can be used for additional children or re-sold to someone looking for used cloth diapers, which brings down the total cost even more. One thing I will say, the hardest part about money saving cost with cloth diapers is that even though you have enough, you continue to want more because you just can’t say no to cute fluff!

Health– One of the best ways to convince dad after how much money you will save is that it will help by exposing the baby to less harmful chemicals.  Disposable diapers have many chemicals in them. One of the most harmful is Dioxin, which has actually been called the most toxic of all cancer-link chemicals by the EPA.  Dioxin is ever banned in most countries across the world, but not the US. Disposables also contain polyacrylate and tributyltin.

Environment– One baby is disposable diapers produces up to one ton of waste from birth to 2 years old. Because a majority of cloth diapers keep everything out of landfills, it’s easy to see how it’s much better for the environment.

Smelly– Some believe that because you are not throwing away that diaper that it will become smelly.  However, the typical family leaves disposables diapers in the trash to be thrown away up to a week.  I don’t know about you, but I’ve opened a trash pail with dirty diapers inside and it has almost knocked me on my feet. The great thing about cloth diaper smell is that it is almost non-existent.  Most cloth diapers are laundered within 2-3 days and any poo is flushed down the toilet, not allowing smell to build up over time.

Dunking– One of the infamous myths of cloth diapering is that you still have to “dunk” diapers in the toilet.  This actually isn’t true at all. Most poo comes off fairly easily and can just plop into the toilet.  Additionally, as cloth diapering has evolved there are now diaper sprayers that help with problems that you may have.

Laundry– This was actually the one question Andrew raised.  Won’t poop be left in the washing machine?  No worries.  A small amount of poo may be left on the diapers after spraying or “plopping”; however, this is no more than would be left on if you used disposables and had a “blowout”. Speaking of “blowouts”… many cloth diapers contain “blowouts” that many parents face with disposables, therefore laundry is cut down in that aspect because there are less clothes to wash when a blow out may have occurred if using a disposable. There is absolutely no worry about poo being left in the machine.  If your diapers are clean before drying, so is your machine!

If he’s semi on-board, but not quite all the way, suggest that you buy a few. My biggest suggestion for a borderline dad is an All-in-one (AIO) diaper or try out a diaper loan program.

If you cloth, was it hard for your to convince dad?
If you don’t cloth, what was your reason for not considering?

Prepping Cloth Diapers for a Newborn

Am I an Eco-Mom?? My decision to cloth…
« Hospital Bassinet Sign for Breastfed Baby
36 week Pregnancy update »