You are here: Home / Home / MommyCon Philly Rocked More Than Ever 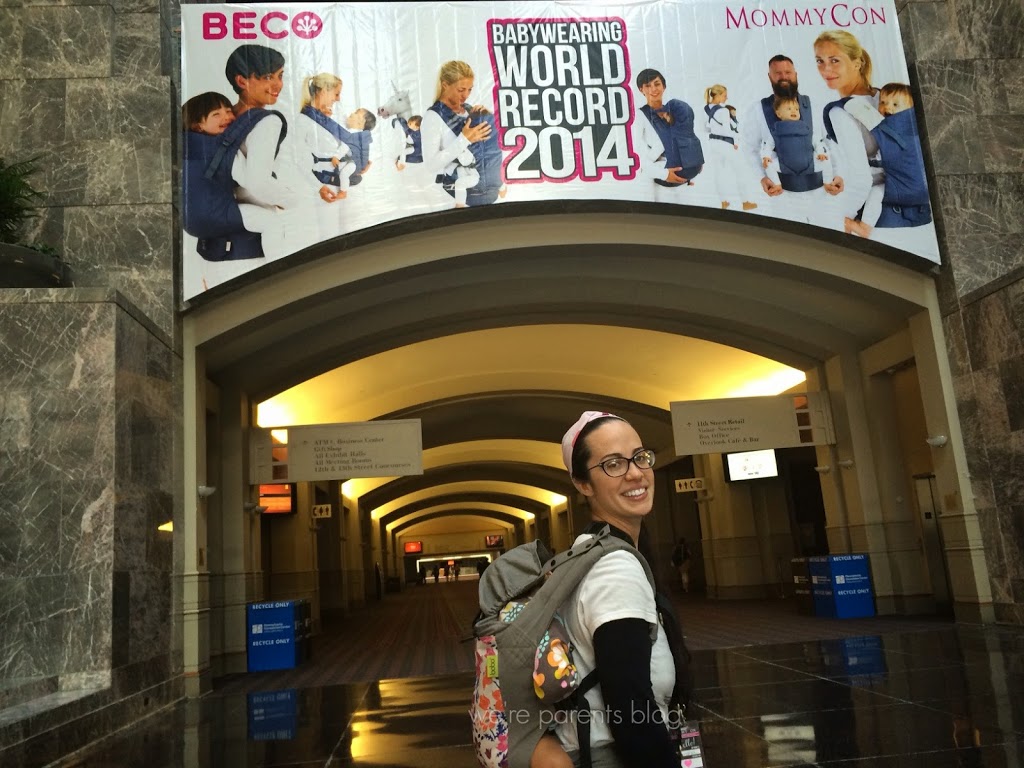 *Disclosure: We received tix to MommyCon Philadelphia free of cost.. Thoughts and opinions are 100% ours. Affiliate links may be contained in this post. We receive a small commission for purchases and thank you for helping us continue to run our site.

Last year we went to the first MommyCon in Philadelphia.  Even though last year was tight and crowded, we had an incredible time all around last year and we know with the bigger venue this year, that it was going to be even better.  And it was!
Unfortunately, we weren’t able to make the VIP day on Saturday, but we were determined to make Sunday enjoyable for the General Admission day.  I’m a firm believer in your experience is what you make of it, so we went in full of expectations that it was going to be fabulous.

When we arrived, we were able to check in quickly and easily.  We were given a booklet explaining what each seminar would be about, as well as a map that showed where each thing would be and were directed upstairs.  “Swag” bags weren’t ready when we got there, but after about 30 minutes, we saw on social media that they were available downstairs, so we went and grabbed them.

We love this parenting convention because whether you are new or a seasoned “attachment parent” there is something to learn if you just listen and take it all in with each speaker. Which, I’ll say, isn’t easy to do with a toddler wanting to run around.  But again, I was determined to have fun! 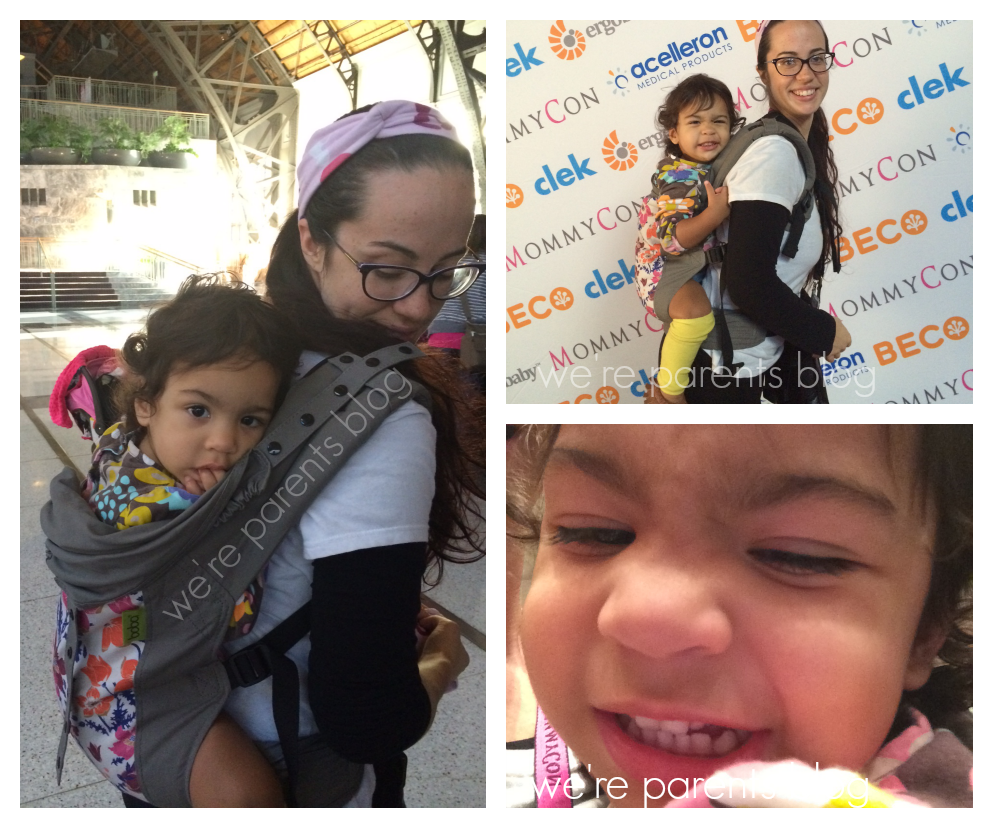 Overall, Skibbles was a huge sport during the event and we only had one meltdown.  Luckily, MoMo helped fix the meltdown.

The day was jammed packed with speakers on Attachment Parenting, Slow Movement, I Support You campaign, Breastfeeding, Babywearing, Car Seat Safety, Yoga, and SOOO much more. While I consider myself, personally, seasoned in attachment parenting, I still learned so much.  Jessica from The Leaky Boob, did a breastfeeding seminar about how Breastfeeding Heals.  It was incredibly powerful, and even though Skibbles and I did really have any issues, the first few weeks were hard, and knowing that I nourished her though the hard time is healing, but I had never put those two terms together.  I wish I could play the audio of her entire speech over and over again to so many struggling moms.

I’ll have to admit, my favorite part this year, hands down, was The Honest Toddler.  It was like a comedy show about my life.  I was curious if she would be as funny in person as she was on-line, and she was funnier.  She actually pulled a first time pregnant mom out of the audience and sat her down to discuss parenting.  “Want to eat chocolate?  You’ll have to do that in the bathroom” was one of her lines.   When describing toddler tantrums she can 5 main points

Besides the 8 hours of sleep (does that actually happen!?), she was spot on with how Skibbles is acting right now (Lord, help me). 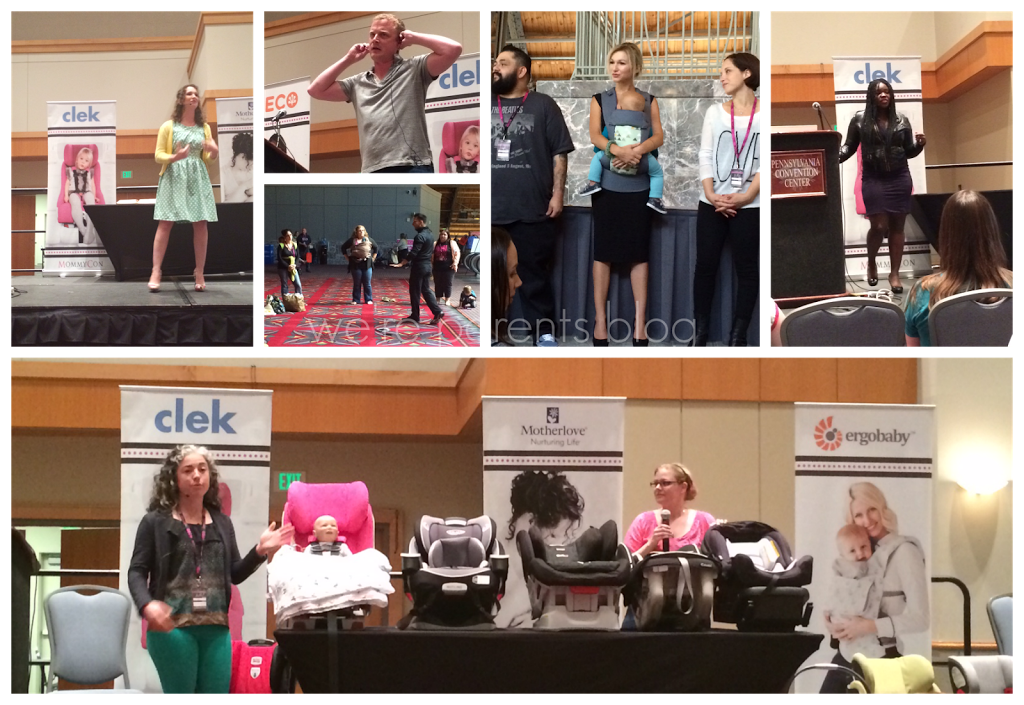 One of the most exciting things was that we the Babywearing World Record took place this year during MommyCon Philly and we were able to be apart of it.  Skibbles fell asleep, but we had such a fun time! It was amazing seeing all of those caregivers in one room wearing their babies and toddlers.  The official count hasn’t been released, but I’m hoping we broke it! 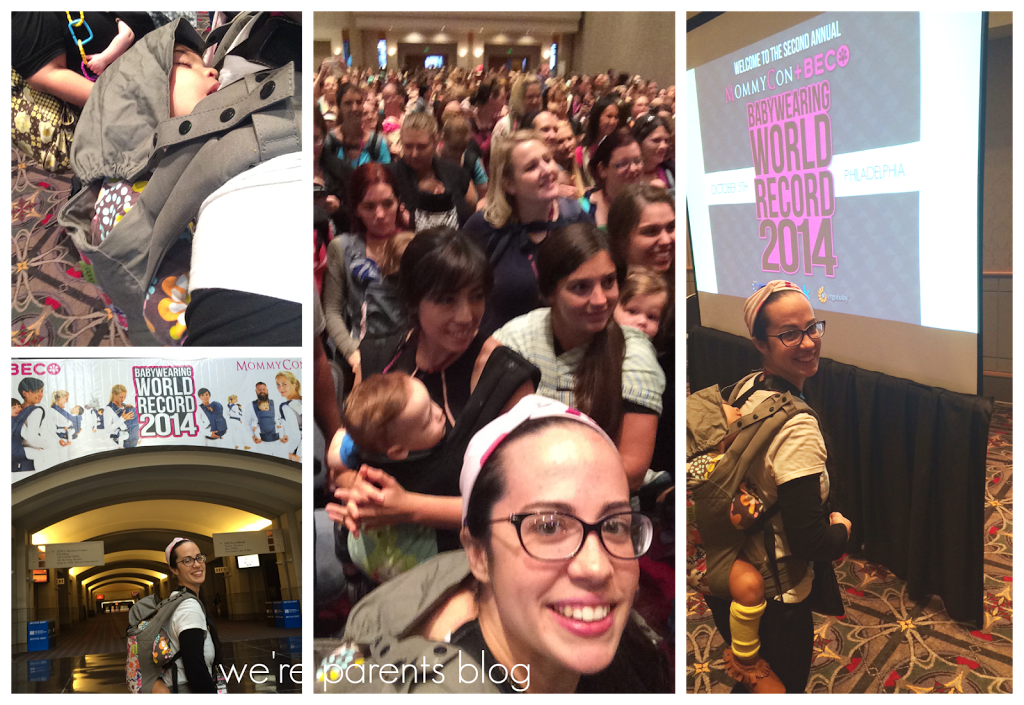 One of the funniest things was noticing a babywearing unicorn on the babywearing world record sign.

My interpretation: We all know unicorns are unique and each of us as a parent is unique in our parenting practices.  We need to respect each other and value the work we are doing as parents and try to judge less. 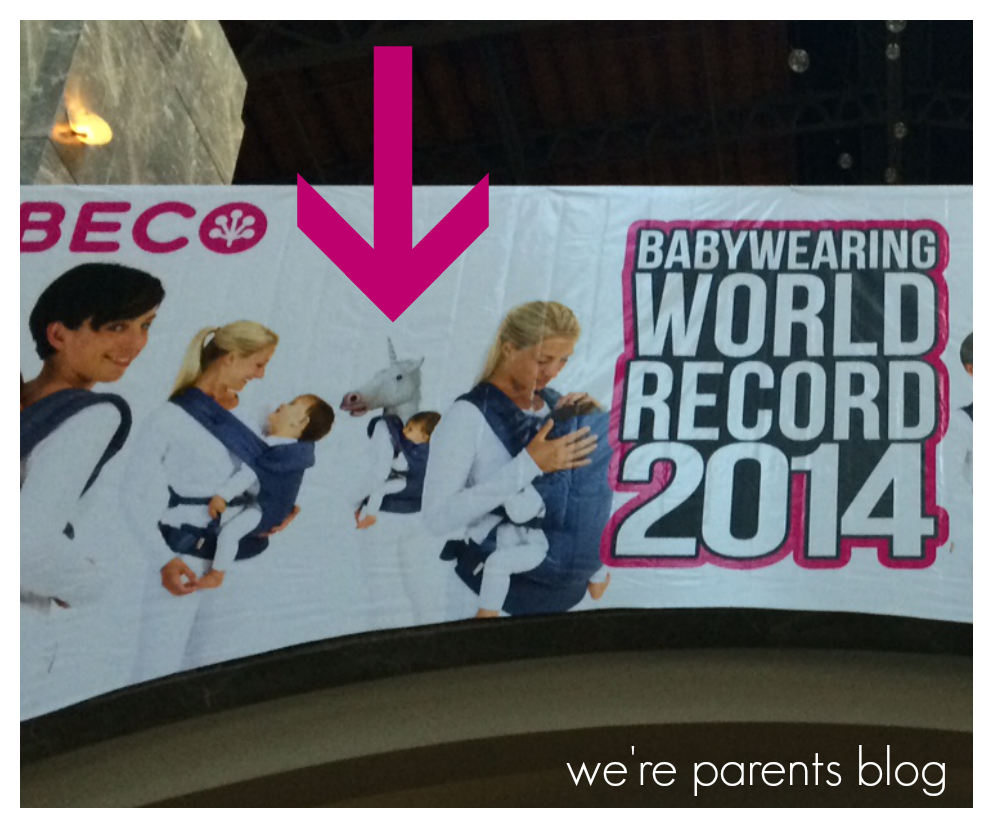 There was also some really exciting things happening as well.  Beco is a top sponsor of MommyCon events across the country and not only did they donate 200 carriers to the Lift Me Up and the Carrying On Project, but they announced that they would be releasing a toddler baby carrier at the end of October 2014, that will hold up to 60lbs.  This is HUGE.  There were three prints available and someone won each of them during MommyCon Philly making them the first people to own them. The founder of Beco even had Jamie, TheBabyGuyNYC, wear her in the toddler carrier to prove how strong it was. 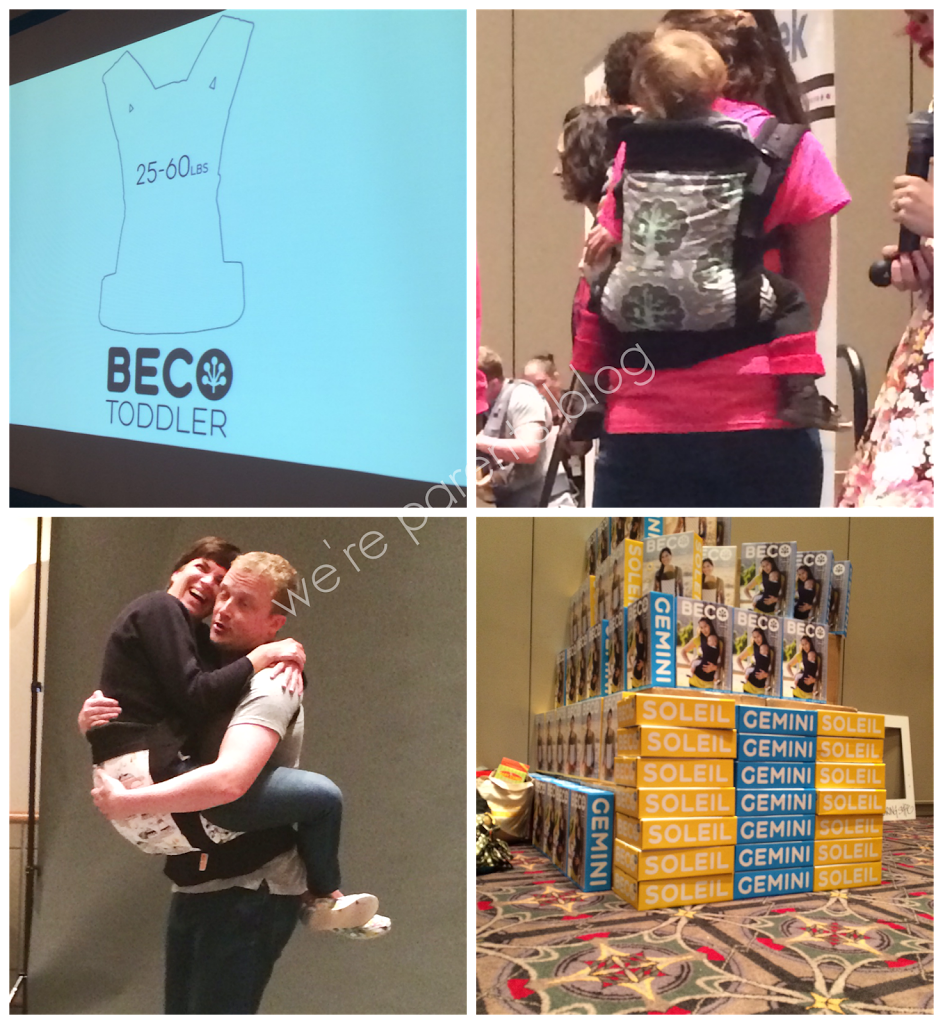 The vendors were also amazing!  I was able to see many familiar brands like Happy Family, Joovy, Combi, Britax, Diono, and Baby K’tan; but, I was also able to learn about some amazing new brands like Kiinde, Bundle Me, Wean Green, and more.  There was a mix of national and small businesses there, and a great mix of products being offered to all moms.  I loved seeing new products from familiar brands too, like the new G2 Stroller from Combi that weighs just 8lbs, a new glass bottle from Joovy called The Boob 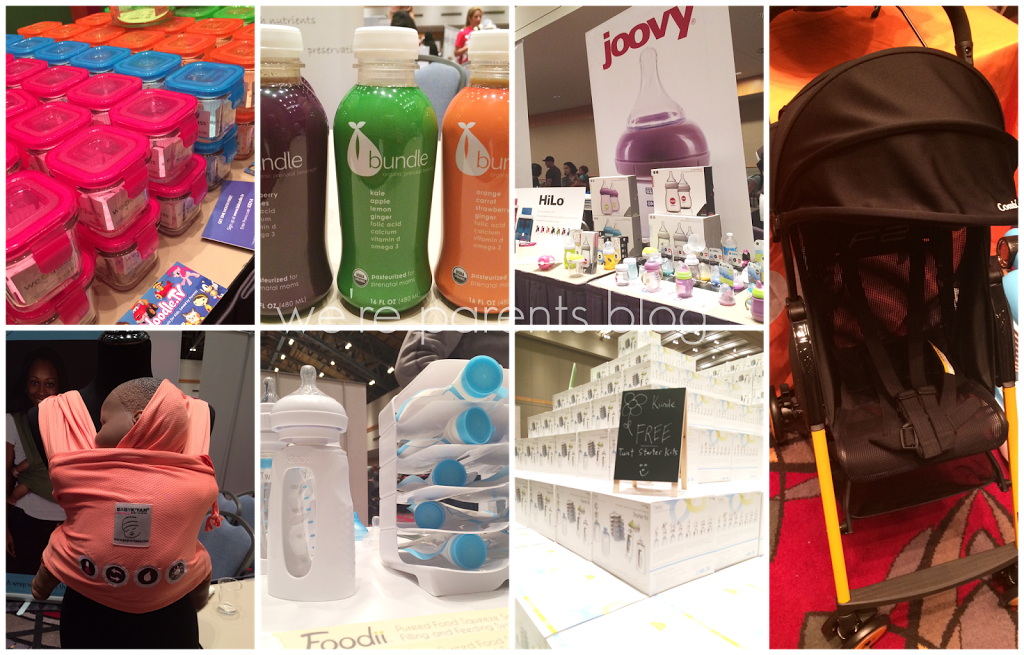 There’s so much more to talk about from the comfy, plush lounge chairs in the nursing area to the awesome changing tables, cloth diaper resource center, toy area for the children, and the Babywearing Lounge.  So many amazing moments from seeing moms comfortable to pump or breastfeed in public, dads taking part in Project: Breastfeeding, and new and old friends coming together with one similar goal: to be the best, most nurturing parent and friend they can be to each other. 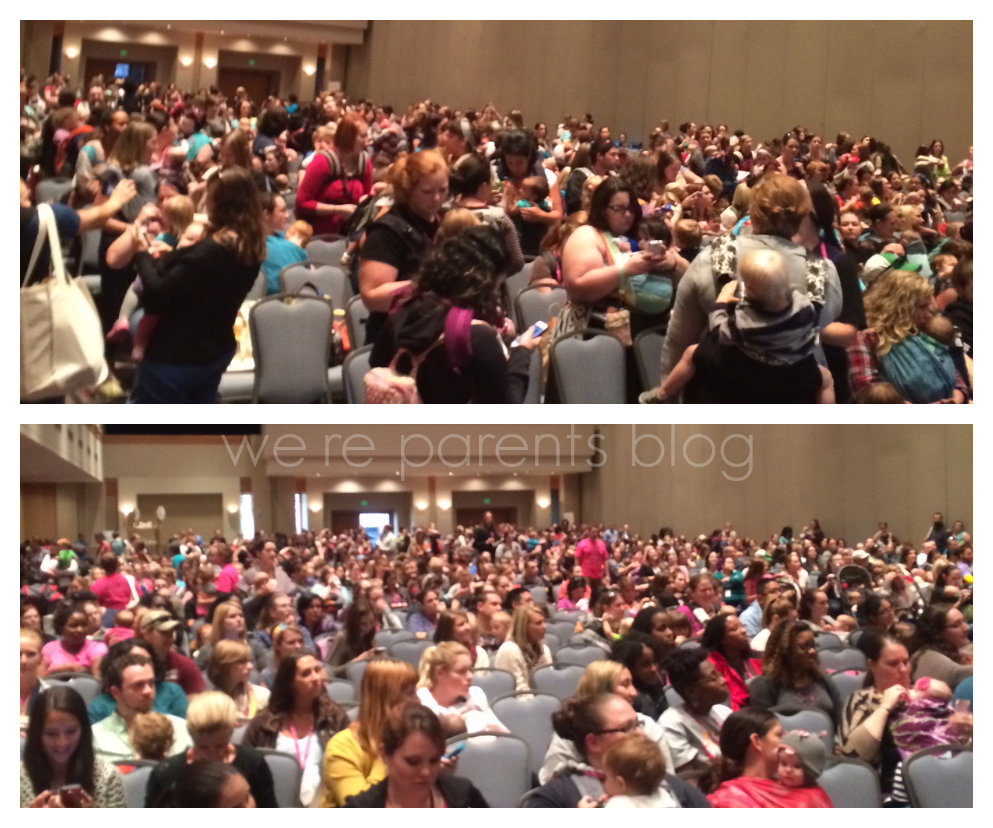 I continue to stand by and support everything that MommyCon is doing and continues to do for mothers and families all across the country.  So far, there’s no word on if there will be another Philly next year, but they will be in DC.  Here’s their line-up of the next cities they will be in:

Remember you can always use code
wereparents
for 10% off your tickets!

Did you go to MommyCon?
Tell us your favorite part in the comments!