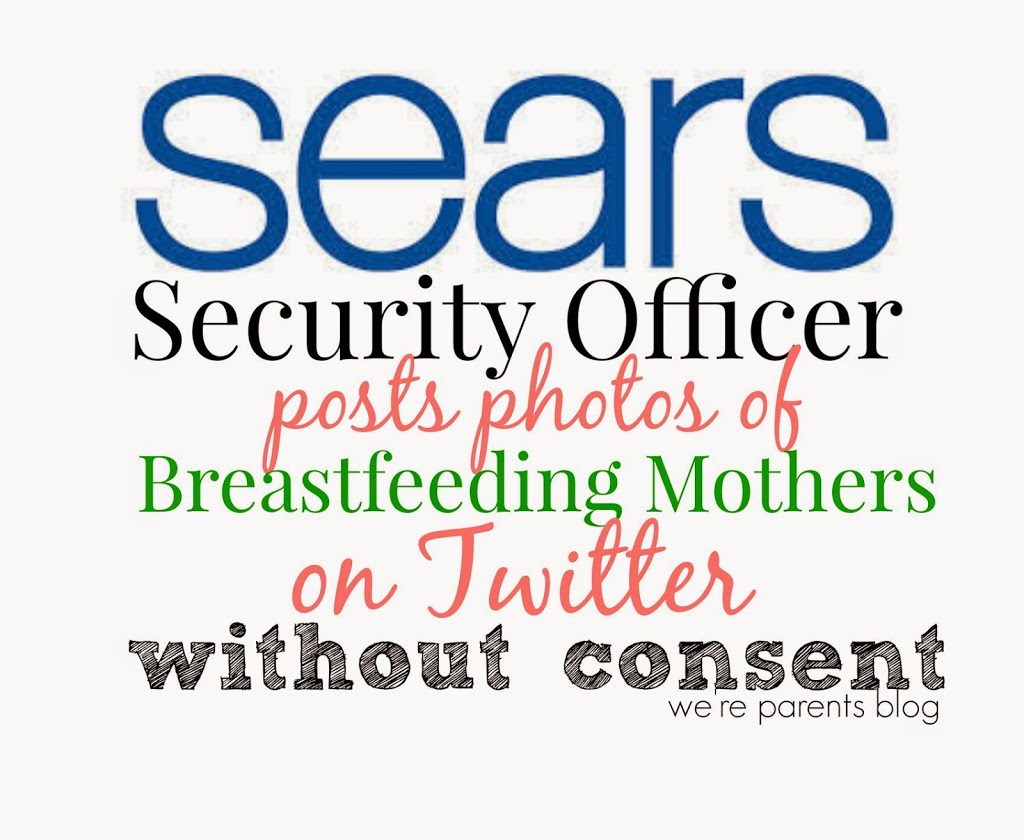 Tonight, I was supposed to be working.  After two days away at a business event, my inbox was flooded.  Instead though, I found myself aimlessly scrolling through Facebook.  Then Instagram.  Then Twitter.  Then back to Facebook.  As I was scrolling, a friend’s post from a few hours before caught my attention.  I had to re-read it a few times, because I was a bit shocked.  “Sears Security officer posted pictures of breastfeeding mothers on Twitter”.
I was immediately appalled and for a second thought I couldn’t be reading this right.

I clicked on the photo which took me to the (by all accounts) first published post about this story on Paa.la.  Someone at this site saw a tweet from @whittt72 who found these photos on Twitter today, June 20, 2014.  According to Paa.la, Nick Carrington’s profile said ”Catching thieves day by day at a sears near you.” Since then, this person’s Twitter account, has mysteriously disappeared. 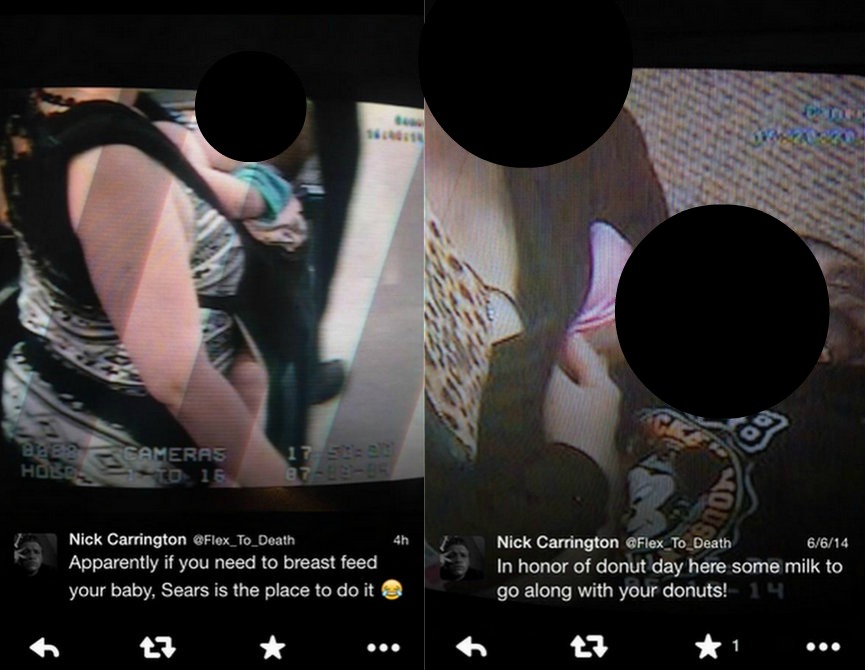 Here’s what we know:

Sears (Sears, Roebuck & Co) is an American department store chain that is headquartered in Illinois with over 1,300 branded and affiliate stores in the United States and Canada.  One of their security officers (or loss prevention officers) apparently posted multiple photos on Twitter of breastfeeding mothers within the last 30 days.  By all accounts the first images were found by @whittt72 and posted to her Twitter account.  From there @paalasecor first published this story.

The original photos were not censored, but have been added by Paa.la because it’s unlikely these mothers did not consent to their images being shown. The image to the right, actually shows an exposed nipple as the baby is trying to latch.  The tone of the poster’s tweet is very sarcastic in nature.

Here’s a little unknown fact about me.  I worked loss prevention at another department store chain, similar to Sears, for almost 3 years before getting pregnant with our daughter.  I went through countless amounts of training and re-training and more re-training every few months about what was and was not acceptable behavior and what we were supposed to be monitoring on security cameras.  Under no circumstances, whatsoever, would videotaping, let alone reposting these images have been acceptable. Did I see images such as this? Sure.  But we were trained to immediately change the camera unless the person was doing something that warranted being watched.  Not because they were just feeding their child.

It’s very likely that this security officer had to record the footage, then use another system to rewind the footage, then take a photo of the paused footage with a camera phone, and then upload the photos to his Twitter account.  That seems like a lot of work to me, don’t you agree?

That means that this person knowingly went out of his way to mock breastfeeding mothers and post their images online.  There is no excuse for this type of behavior towards mothers feeding their children.  We are working diligently to make breastfeeding, especially in public, normalized for mothers, and this is absolutely appalling.

In my opinion, there is no other acceptable alternative than for this employee to loose his job over this.  I say that because even as a brand new employee, he has gone though hours of training already before being certified to use the camera system.  He knew what he was doing was wrong and by all account illegal. It’s absolutely unacceptable and we cannot stand for this type of behavior.

Mothers already have enough to worry about when breastfeeding their children in public.  Publicly shaming them and making them fearful to even shop for fear of harassment by videotaping them without their knowledge is degrading and we must take a stand.

How can you help?
Pressure Sears for an immediate response.
It has been more than 20 hours since the photos were first originally reported to Sears’ Twitter account and this was been their only response “We are investigating this issue.  Thank you for your concern.” 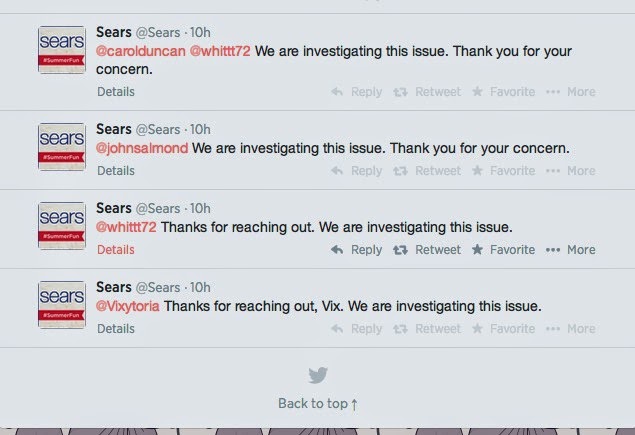 This is unacceptable. You can contact Sears Corporate headquarters and request that they create a breastfeeding policy and train their employees, both standard employees and security personnel, nationwide on how to learn from this breech of trust and how to handle breastfeeding families in the future at all of their stores.

Immediate action- Post to their Facebook page or  Twitter Page
Copy this:  @sears Posting photos of #breastfeeding moms by your security officers is unacceptable.  What’s your action going to be? #searsbfingshaming 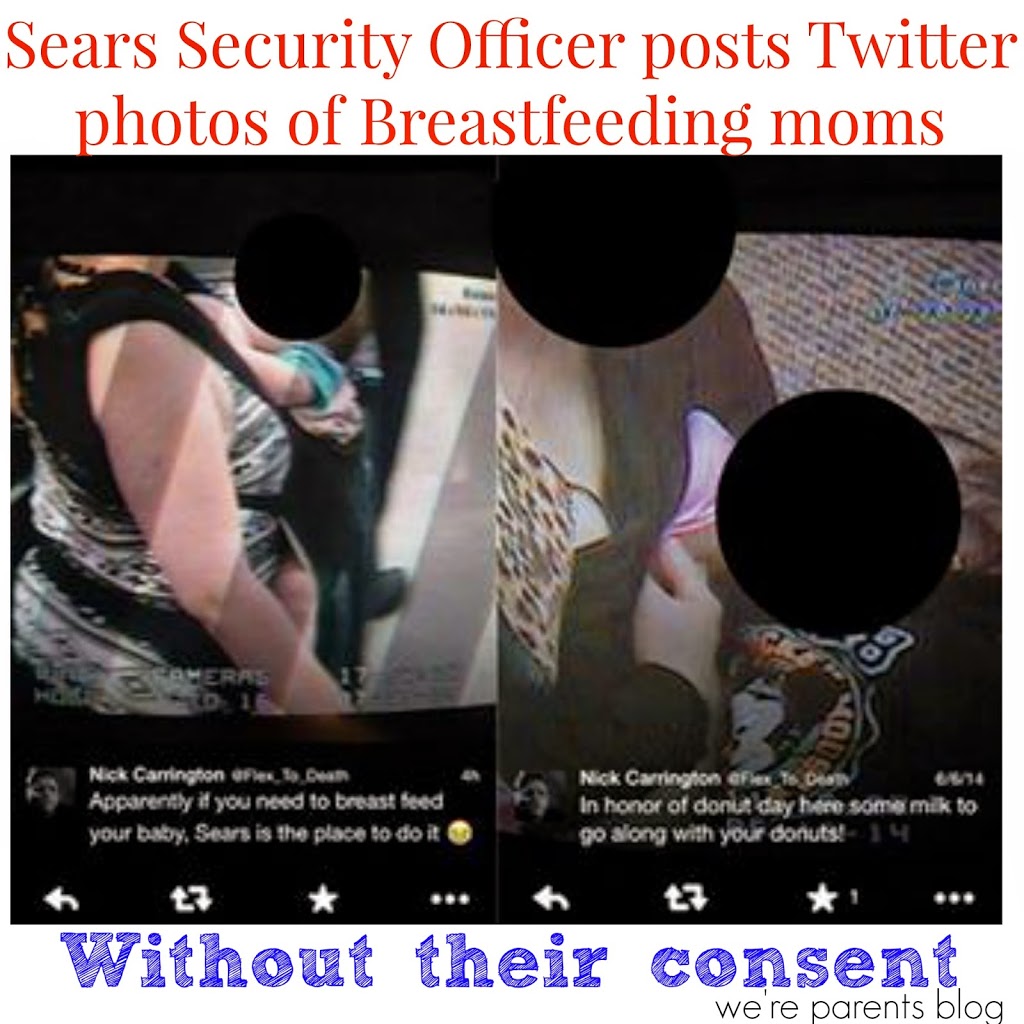 Update:  7/21/14, 12:30pm.  I have posted multiple times on both Twitter and their Facebook page asking for more specifics about this matter, specifically, when they plan to publicly address it.  They have only continued to give the blanketed response “Sears respects the privacy of all shoppers. This matter is currently under investigation.” Stand with me in telling Sears we want answers. Use the hashtag #searsbfingshaming or copy the message above.

Update 7/21/14, 1:30pm. By all accounts, this story seems to be accurate even though no major media outlets have picked up this story. We still have not heard any more from Sears into their investigation to this matter. 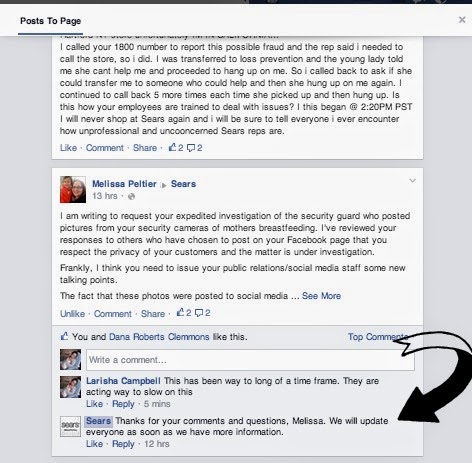 Update 7/22/14, 7:00am. It has now been over 31 hours since I reported this issue.  Around 7pm last night, they commented on a post to their Facebook page (see above) that “Thanks for your comments and questions, Melissa. We will update everyone as soon as we have more information.”

It has been more than 12 hours now since they have made any comments. Based on my search, it appears they have no PR/Social Media posting between 9pm and 9am EST. While in normal cases, this may be acceptable, but for a company as large as this, not addressing this serious matter is unacceptable. The public deserves to know what action was involved and how Sears plans to address issues such as breastfeeding/nursing in public and social media policy with all their employees, but especially security personnel. 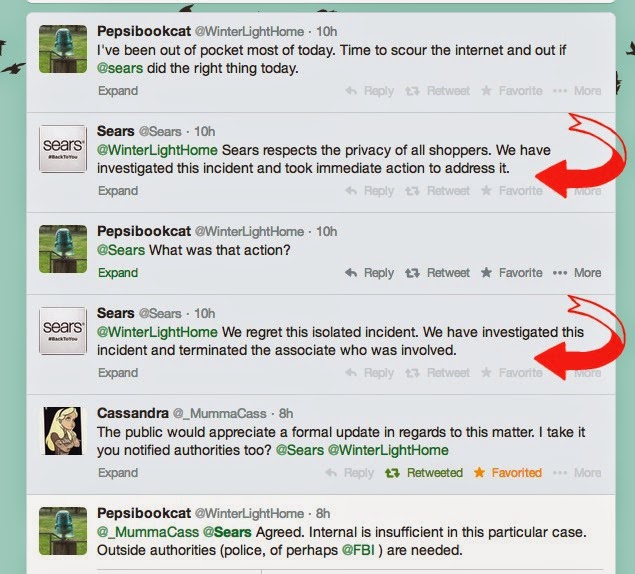 Updated 7/23/13, 11:00am. Sears has failed to publicly address this incident and how they plan to prevent it from happening again in the future. We have launched a boycott. Details HERE.

What’s your thoughts on this?
Do you agree this employee should be fired?