This Caramel Apple Cinnamon Roll Wreath is the perfect brunch or breakfast meal for the holidays! The perfect brunch show stopper! You will wow everyone with this easy cinnamon roll centerpiece.

Affiliate Links contained in the post help us earn a commission. 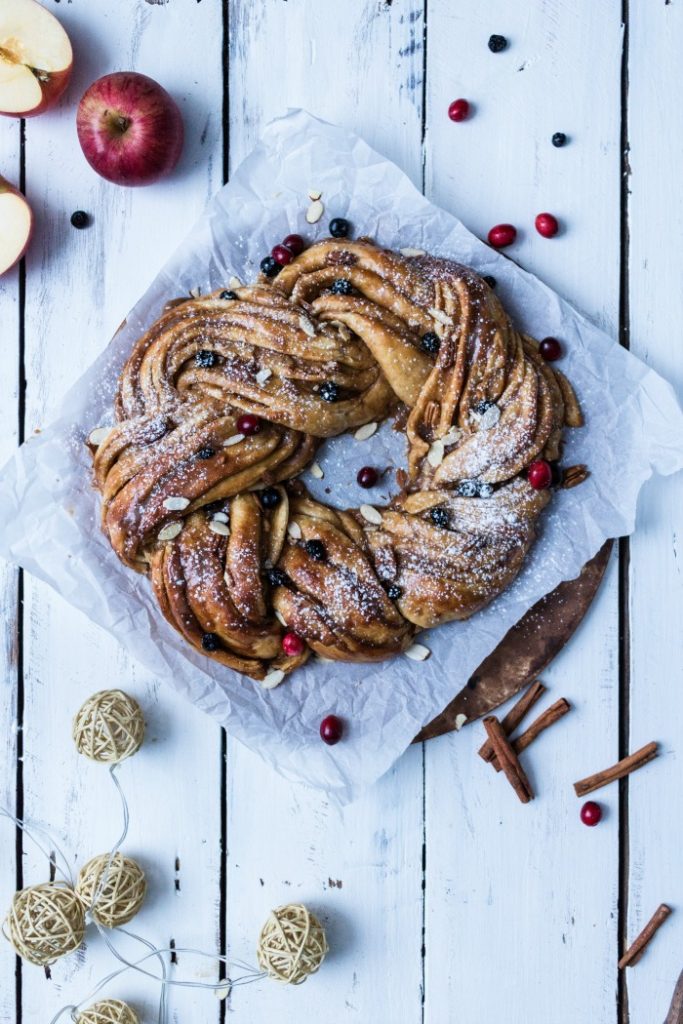 Warm, soft dough, layered with a caramel apple sauce is the most amazingly special cinnamon roll recipe we’ve made to date.  The kids gobbled up this cinnamon roll wreath (naturally) and begged for more.

The inspiration for this new holiday tradition

Every year, on Christmas morning, my mom would pop open a can of cinnamon rolls and pop them into the oven. We all knew that she would get the middle one and then the rest were up for grabs.  I remember begging to lick the icing container of any last remnants that remained inside. It was pure bliss as a child.

Now, that my girls are older, I love making them cinnamon rolls too.  It’s actually an amazingly fun thing to make with them. We have them on special occasions or just because, but it’s always awhile in between. Their giddy laughter warms my heart when I tell them what we are making. They jump up and down, dance, and run around with excitement. They too love to lick the bowl of icing when I’m done pouring it on. Can you blame them?

For the holidays though, I wanted to do something extra special.  We decided we were going to make a wreath out of our cinnamon roll dough. We may have done a few more practices runs at this one….strictly for testing purposes only. *wink wink*

This is now one of our family traditions and the girls absolutely love it. So do we. 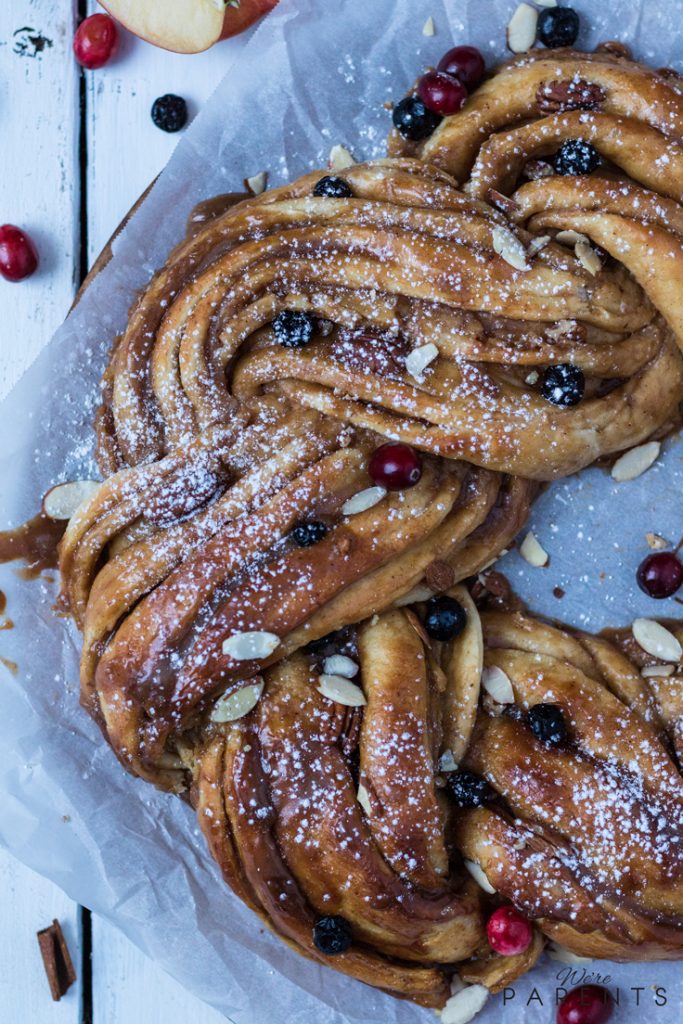 What ingredients do you need to make a caramel apple cinnamon roll wreath?

Lastly, there’s a delicious caramel apple icing that we add to the top of this. For the icing, you’ll need: 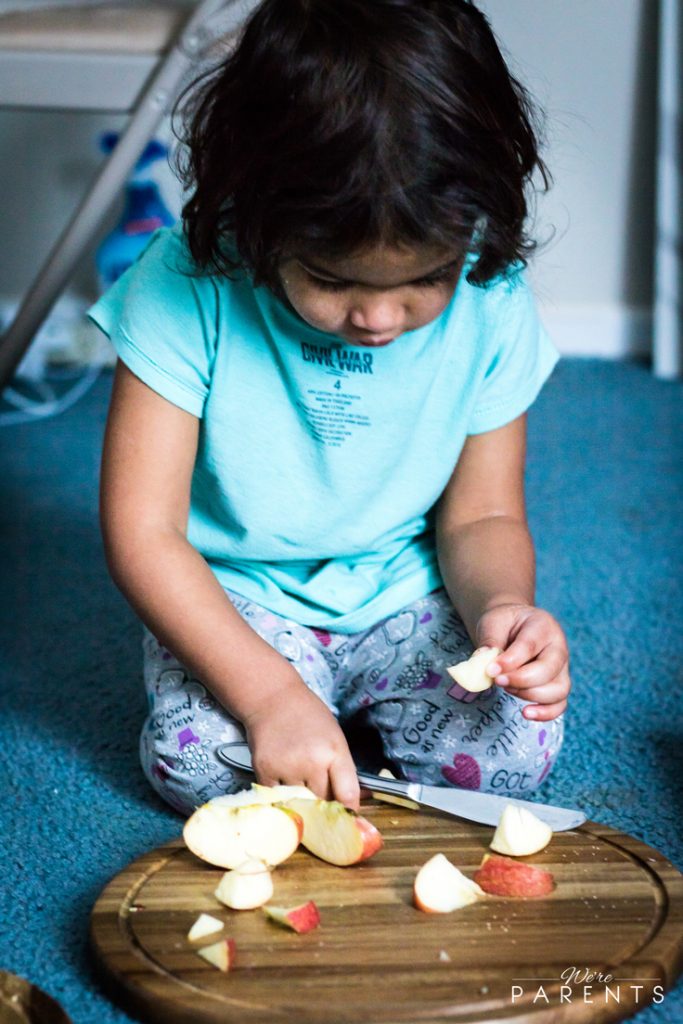 How do you make a caramel apple cinnamon roll wreath?

In a bowl, you’ll start to make the dough. Add in the flour, sugar, salt, and yeast. You’ll add water and milk to a bowl of warmed, melted butter and pour that into the flour mixture.  Next, add in the eggs.  Then, knead with your hands until the dough is no longer sticky. Let it rise for just 15 minutes.

While the bread is rising, make the filling by combining the apple cider, brown sugar, maple syrup, heavy cream, unsalted butter, vanilla, salt, nutmeg, and some of the apple pie spice into a sauce pot. Let that cook over medium heat for 10 minutes, barely touching it. You are essentially making caramel sauce at this point and it’s best not to touch it. Remove, let cool.

Roll your risen dough out into a rectangle.  It should be about 30X20 in shape. Spread the cooled caramel apple sauce across the dough. Spread the remaining pie spice across the top. Roll up the dough into a log.

Essentially at this point you could turn them into cinnamon rolls by just cutting into even slices.

To make the cinnamon roll wreath, you’re going to make sure the seam side is down and slice lengthwise. Then, place the two pieces side by side with the filling side up. Starting at the top, fold one piece of dough over the other and braid the two strands until you reach the end. Pinching the ends together. Place on a greased baking sheet and form a circle. Cover and place in a warm preheated, but turned off oven. After 35 minutes, turn the oven on and cook for roughly 35 minutes.

Make the caramel apple icing while your cinnamon roll wreath cooks. Pour on top when you remove and let cool for a few.  Serves 16. 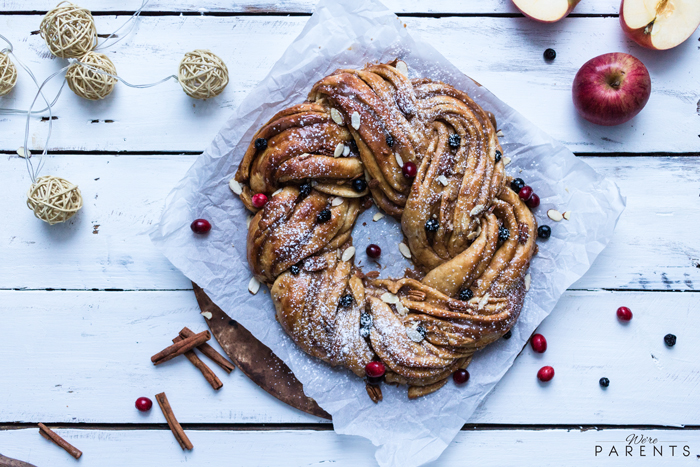 Absolutely! Whether you don’t feel like taking the extra steps or maybe a little intimidated by making a cinnamon roll wreath (seriously don’t be), there may be reason for you wanting just regular caramel apple cinnamon rolls instead.

You will make the recipe as directed until you end up with a rolled up log.  Instead of slicing the cinnamon roll log down the center, you will just cut into slices. You should be able to get 18 rolls out of the log that you roll.

Then you will proceed with the recipe as directed, but only bake the cinnamon rolls for 25-28 minutes. It’s super easy! 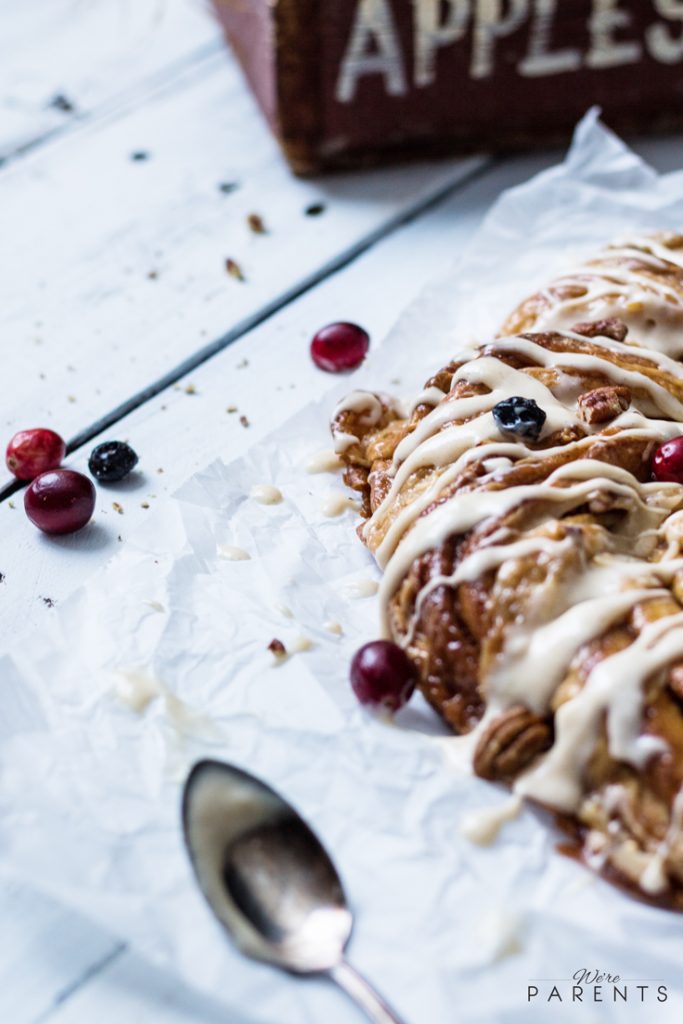 What other recipes could I serve for a holiday or Christmas brunch?

Obviously this recipe, makes for an absolutely amazing holiday brunch or breakfast centerpiece. It’s gorgeous, tastes amazing, and will completely wow people. However, you need more than this to serve! Other brunch or breakfast holiday recipe ideas are: 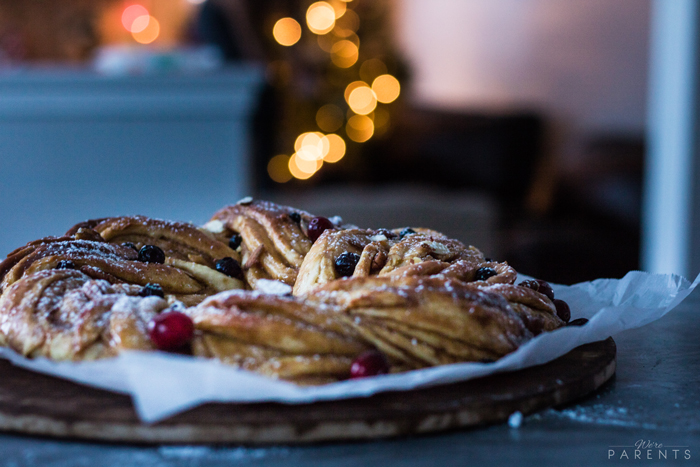 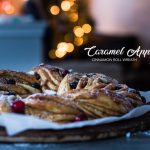 **Nutritional facts are just estimates. Please utilize your own brand nutritional values to double check against our estimates.  Nutritional labels to not include optional toppings, but does include icing. 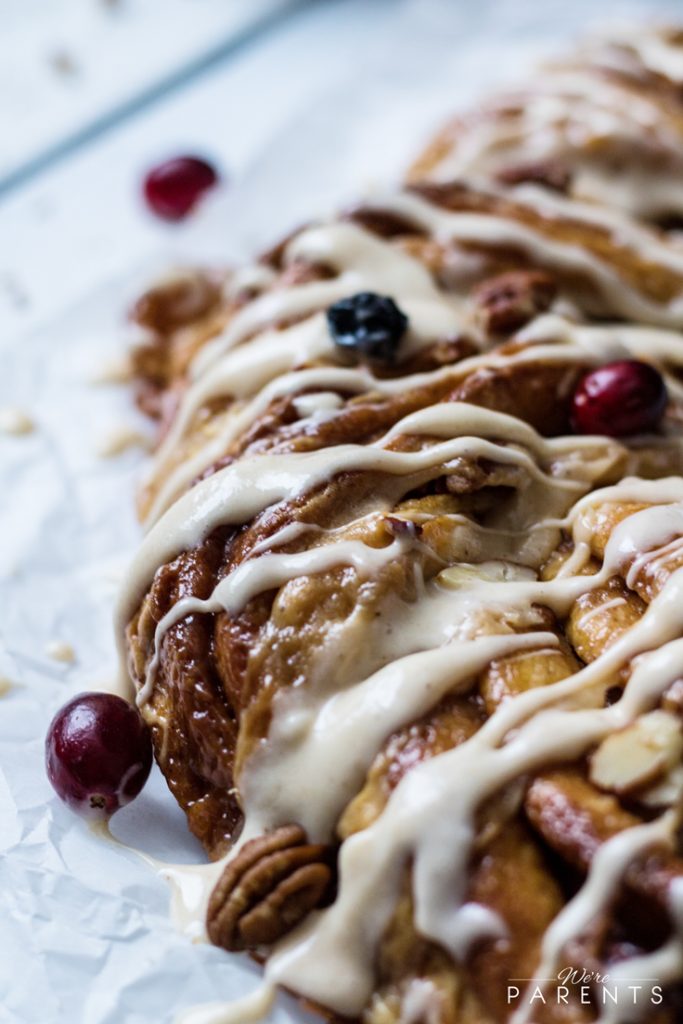 This was truly one of our most favorite things that we have made on our site before and we hope that you truly enjoy it as much as we have. Happy Holidays from our family to yours!

Some items that may help you make this recipe:

This post was originally published on 12/20/2017 and has since been updated.

Peanut Butter and Jelly Smoothie Bowl
« A Co-Sleeping, Breastfeeding Holiday Tune
Christmas Gifts Your Kids Are Guaranteed To Play With »