You are here: Home / Dinner / Tortilla Pizzas
This isn’t my typical recipe post.  More so just me sharing my laziness from yesterday!
Andrew wasn’t home last night for dinner, which doesn’t happen very often. Because of this, I knew I wasn’t cooking anything like normal.  I had decided earlier in the day that I would run to the store and grab a pizza and just enjoy the night. However, as the day went on, I was just being lazy and really didn’t feel like running out to the store to grab one and also didn’t feel like calling to order and spend $10+ on one pizza.
So I was left with a decision.  Get my lazy butt up and go to the store or go into the kitchen and figure out what to make. I was still really craving pizza.  If you have been following my blog, you know I love making my own dough and making either pizza, calzones, or pizza bites, but let’s face it…I already said I didn’t feel like cooking, I wasn’t waiting for dough. 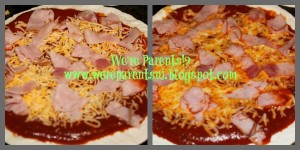 Just as I was about to reach for the box of cereal, I got a genius idea – tortilla pizzas!  I’ve never done this before, but it was great.  I grabbed two tortillas, a can of pizza sauce, cheese, and since I didn’t have any pepperoni, I grabbed some sliced ham and chopped it up.  I layered it all on top of the tortillas shells and threw into the oven on 350 degrees for 5 minutes when I noticed the cheese was pretty melted.

It was a nice little treat.  I did end up rolling it up like a burrito because it was just sort of hard to cut being so thin, but I loved it!!  I really can’t believe that I had never thought to create something like this before!

Has anyone else ever done this before?